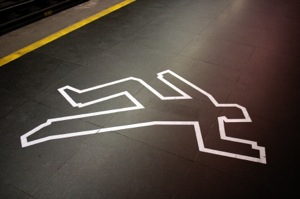 A person charged with homicide faces a significant amount of time in custody, and in the case of murder, the possibility of never being released from custody. In the extreme case of capital murder, they face being sentenced to death.

There are several types of homicide, ranging from manslaughter to capital murder. In some cases, with the assistance of a very skilled defense attorney with significant resources, a murder case could be reduced to manslaughter, or even dismissed due to legal defenses.

Homicide is the killing of one human being by another, either lawfully or unlawfully. Homicide includes both murder and manslaughter. A killing is lawful if it is done with justification or as a defense to oneself or another person's imminent threat of being killed.

Murder is defined as the unlawful and unjustified killing of another human being with malice aforethought (Penal Code Section 187). "Malice aforethought" is defined as an intention to unlawfully kill a human being. That intention can be either express (such as pulling out a gun and pointing at a person and pulling the trigger after making a statement that they are going to kill the person) or implied by the actions.

Watson Murder is when a person drives a motor vehicle and has previously had either a DUI or a very bad driving record and then subsequently drives and is either DUI, or violating some other code section, and kills another person. Because the driver is considered to have knowledge of their lack of ability to safely drive, the death is considered to be implied malice murder.

Manslaughter is the unlawful killing of a human being without malice aforethought (Penal Code Section192 PC). Manslaughter may be voluntary or involuntary. Essentially, the difference between manslaughter and murder is that manslaughter was the result of an accident, heat of passion, or some other act in which the person does not have the mental state to commit a murder.

Voluntary Manslaughter - Penal Code 192(a) PC occurs when a person kills another in the heat of passion, without planning beforehand. The classical example is when a person finds their spouse having sex with another person and reacts immediately by killing.

Involuntary Manslaughter - Penal Code 192(b) PC also known as criminally negligent homicide, occurs when a death is an indirect result of recklessness or negligence. This occurs when a person runs a red light and hits another vehicle and a person is killed.

If you have been charged with a homicide offense in Los Angeles, Riverside, San Bernardino, or Orange County, it is important that you seek the services of a criminal defense attorney with extensive experience with all types of homicide cases. If you have been arrested for a homicide case in the Los Angeles or Southern California area, call Michael Kraut. Mr. Kraut understands the serious nature of this offense, how best to defend you, and how to resolve your case without you going to jail. Mr. Kraut has extensive knowledge of the law and the legal system. He has developed excellent relationships with law enforcement and law officials throughout the Los Angeles and Southern California.