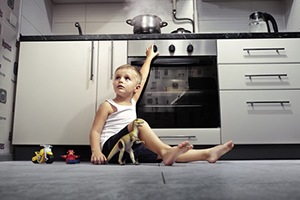 While people understand that child abuse is a serious criminal offense, many do not know that negligently placing one’s child in a dangerous situation is also a domestic violence crime. Under California Penal Code Section 273a PC, child endangerment is a criminal offense that can result in felony charges.

The Elements of Child Endangerment

In order to be convicted of child endangerment, the prosecutor would have to prove the following elements beyond a reasonable doubt; that the defendant inflicted pain or mental suffering child without justification or permitted the child to suffer pain or suffering, that there were circumstances likely to produce death or great bodily harm, that the defendant was criminally negligent and that the defendant did not act reasonably in disciplining his or her child.

In many cases, a defendant who is arrested for driving under the influence with a child in the vehicle can also be charged with a separate count of child endangerment. The prosecution could also add a California Vehicle Code Section 23572 PC allegation to the DUI charge when a defendant has a minor in a vehicle at the time of a DUI offense. This sentencing enhancement can result in mandatory jail time upon conviction for DUI.

There are several legal defenses that may be applicable to defendants who have been accused of child endangerment. These types of allegations often arise during contested child custody arguments between parents. In many cases, one or both parents may falsely accuse the other of child endangerment and even coach the child to provide a false account of facts. In these cases, it is necessary to establish the motive to lie and demonstrate how the accusation was, in fact, false.

In addition, this is a criminal offense that is extremely fact specific. Reasonable parents may momentarily have a lapse of attention during which their child does something or gets into a situation that is potentially dangerous or life-threatening. In these cases, the defense can argue that no crime had been committed. In addition, there are also circumstances where one parent is charged with child endangerment for bringing a new boyfriend or other person into the home that could potentially harm the child. In these cases, the defense would have to demonstrate that the defendant’s conduct was neither international nor criminally negligent.

Penalties and Consequences of a Child Endangerment Conviction

Typically, prosecutors will opt to file misdemeanor child endangerment charges where there was little or no risk or death or great bodily harm involved. In these cases, the defendant can be sentenced to serve up to six months in jail if convicted. In addition, the court will typically require that the defendant complete intensive parental counselling as a condition of probation.

If the child endangerment involved a risk or death or great bodily harm, the defendant can be charged with this offense as a felony. If convicted, he or she can be sentenced to serve up to four years in prison.

The police will always refer these cases to the Los Angeles County Department of Children and Family Services (“DCFS”) who will perform their own investigation relating to the welfare of the child. Ultimately, DCFS can petition for removal of the child from the home and placement in a safer environment.

Those who are convicted of child endangerment will be prevented from working in child care or teaching jobs and a conviction of this nature can also threaten professional licenses.

If you or a loved one have been arrested for child endangerment, it is crucial that you consult with an attorney familiar with these types of cases as soon as possible. As a former Deputy District Attorney with over 14 years of prosecutorial experience, Michael Kraut appreciates the sensitive nature of cases like this and works hard to ensure his clients receive the best representation possible.