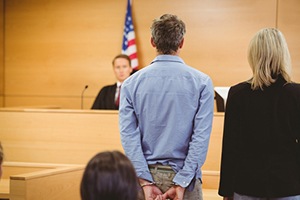 A domestic violence case begins when one or both parties involved in a domestic incident are arrested. Domestic violence suspects will typically be required to post bond in order to be released from custody. The case will usually be assigned to a detective from a domestic violence unit who will review the arrest reports and may conduct a follow-up investigation. The detective will ultimately make a filing recommendation and submit the case to the appropriate prosecutorial agency for charging. In defending a domestic violence case, it is often critical to intervene prior to the case being submitted for filing consideration.

The first court appearance in a domestic violence case is the arraignment, where the defendant is formerly informed of the charges and is expected to enter a plea. The defense will be provided a copy of the complaint and the incident reports. Many domestic violence crimes are “wobbler” offenses that can be filed as either a felony or a misdemeanor. If charged with a felony, the defendant will be required to personally appear at the arraignment and all subsequent court dates. If charged with a misdemeanor, the judge will typically require that the defendant appear for his or her arraignment in order to be served with a protective order.

If the defendant enters a plea of not guilty, the cases will be set for a future pretrial date. There often may be several pretrials over the course of a criminal case. The parties will typically exchange discovery at these pretrials and negotiate to try and settle the case. If the prosecution sees that its case may not be strong or if the victim does not want to be involved, the prosecution may consider significantly reducing or dismissing the charges. If the parties are unable to resolve the case, the matter will be set for trial.

At trial, the prosecution would be required to prove its case beyond a reasonable doubt. The prosecution can proceed with trial even where the victim is not cooperative. However, the United States Supreme Court recently limited the ability of prosecutors to use a victim’s statements where that person is not available for trial. After both parties have had an opportunity to present evidence and question witnesses, the jury deliberate and will determine whether or not the defendant is guilty or not guilty.

If you or a loved one have been arrested for a domestic violence offense, it is crucial that you speak with an attorney immediately. As a former Deputy District Attorney with over 14 years of prosecutorial experience, Michael Kraut is highly effective at representing clients charged with domestic violence. In many cases, Mr. Kraut’s early involvement has resulted in charges being significantly reduced or rejected completely.