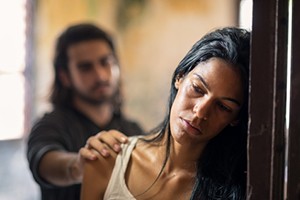 When an individual is arrested on suspicion of domestic violence, he or she will usually be initially cited for corporal injury to a spouse in violation of California Penal Code Section 273.5 PC. This offense is a “wobbler” which can be filed as either a felony or a misdemeanor. However, when injuries are slight or nonexistent and the defendant does not have a prior record, he or she may ultimately be charged with domestic battery under California Penal Code Section 243(e)(1) PC. This is a misdemeanor level offense and those convicted of this crime can face extensive court penalties as well as numerous other collateral consequences.

The Elements of a Domestic Battery Offense

In order to prove that a defendant is guilty of domestic battery, the prosecutor must be able to prove the he or she touched the victim in a harmful or offensive manner and that the victim is a current or former spouse, cohabitant, fiancé, co-parent or person with whom the defendant had a previous dating relationship.

The physical contact can be slight and does not need to leave a mark or permanent injury. Even a push or shove that causes no damage can be sufficient to support criminal charges of domestic battery under California Penal Code Section 243(e)(1) PC. A defendant is not guilty of domestic battery when his or her conduct was entirely verbal and there was no harmful or offensive physical contact. However, defendants who threaten violence can be charged with criminal threats in violation of California Penal Code Section 422 PC, which is a potential felony.

How Does a Prosecutor Prove Domestic Battery?

In a domestic battery case, the prosecution will typically rely on the testimony of the victim. There may be other witnesses who observed the battery and there may be photographic evidence of injuries that can be presented to the jury. In many cases, the victim may not want to press charges however the prosecutor will often go forward even where the witness is not cooperative. The victim can be subpoenaed to testify and a warrant can issue if he or she fails to appear in court.

Previously, prosecutors were able to introduce the victim’s hearsay statements to police when the victim was unavailable at trial. The United States Supreme Court recently found this to be a violation of the Confrontation Clause which allows criminal defendants to confront their accusers.

Consequences of a Domestic Battery Conviction

Defendants who are convicted of domestic battery can face a number of penalties imposed by the court. Judges often require those convicted of domestic battery to complete a 52-week domestic abuse counselling program. In addition, the defendant may be required to serve time in jail, complete community labor or community service hours and pay costly court fines. The judge will usually issue a protective order preventing the defendant from contacting the victim.

The defendant would have to surrender all firearms and would be prevented from owning or possessing firearms for a specified period of time. In addition, a conviction for domestic battery on one’s criminal record may cause problems with certain state professional licensing boards and would likely come up during background checks conducted by employers.

If you or a loved one are facing charges for domestic battery, it is imperative that you speak with an attorney experienced in representing domestic violence cases right way. Michael Kraut is a former Deputy District Attorney with over 14 years of prosecutorial experience who fights hard on behalf of his clients charged with domestic battery and other domestic violence crimes. In many cases, Mr. Kraut has been able to have charges rejected or significantly reduced even before the case goes to court.