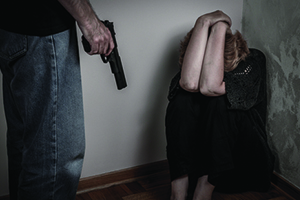 Some domestic violence offenses involve the use of deadly or dangerous weapons. In these cases, the defendant can be charged with assault with a deadly weapon as a felony and may be subject to additional penalties and even a “strike” under California’s Three Strike Law. If the deadly weapon involved is a gun, pistol, shotgun or other firearm, the defendant can be charged with assault with a firearm under California Penal Code Section 245(a)(2) PC. If the offense involved an intimate partner or family member and the defendant is placed on probation, he or she would be subject to the domestic violence sentencing requirements as described in California Penal Code Section 1203.097 PC.

Weapon Does Not Have To Be Fired For Criminal Charges

A defendant can be charged with assault with a firearm under California Penal Code Section 245(a)(2) PC if he or she points a loaded firearm at another person. There is no requirement that the weapon actually be fired or discharged in order for the defendant to be charged criminally. This means that a person who points a loaded gun at a husband, wife, boyfriend, girlfriend or family member during a domestic dispute can be charged with a serious felony.

If the firearm was not loaded, the defendant can be charged with brandishing a weapon in violation of California Penal Code Section 417 PC. This is a “wobbler” offense that can be charged as either a felony or a misdemeanor and, unlike assault with a firearm, is not a “strike” offense. The firearm has to be one that operates via an explosion or combustion. This means that bb guns or pellet guns would not qualify as firearms under California Penal Code Section 245(a)(2) Pc.

If the victim was a family member or intimate partner, the defendant would still be subject to the mandatory sentencing requirements of California Penal Code Section 1203.097 PC.

Assault with a Firearm as a Domestic Violence Offense

If the “victim” of the offense was one of the parties listed in California Family Code Section 6211 FC, a defendant convicted of California Penal Code Section 245(a)(2) PC and placed on probation would be subject to certain mandatory provisions under California Penal Code Section 1203.097 PC. This includes the issuance of a domestic violence restraining order that would prevent the defendant from having further contact with the named victim. The judge may be willing to issue the order and reduce it to a Level One protective order that would permit peaceful contact.

In addition, the defendant would be required to complete a 52-week batterer’s intervention program, pay mandatory fines, and complete community service in addition to any other condition of probation that the sentencing judge may choose to impose. This would include jail time, community labor, extensive fines and mandatory counselling.

If you or someone you know have been arrested for a domestic violence offense involving the use of a weapon or firearm, it is critical that you meet and go over your case with a qualified domestic violence criminal defense lawyer as soon as possible. Michael Kraut is a former Deputy District Attorney with over 14 years of prosecutorial experience who understands how to effectively defend clients charged with serious offenses of this nature. In many cases, Mr. Kraut’s early intervention has led to charges being significantly reduced or even dismissed.

For more information about domestic violence offenses with firearms and to schedule your free consultation, Mr. Kraut can be reached 24/7 at 888-334-6344 or 323-464-6453. You can also set up a free initial consultation using our online contact form.