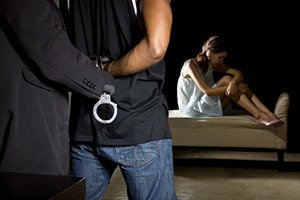 A typical domestic violence case begins when someone involved in a domestic dispute calls the police for assistance. Several officers will respond to the call and the officers will generally separate the involved parties and take statements from each person individually. Many law enforcement agencies now mandate that all domestic violence calls must end in the arrest of one or both of the parties involved. The police will attempt to determine who the aggressor is and then will arrest this party. The police will be looking for injuries, no matter how slight. In some cases, the person who actually called 911 will end up being arrested for domestic violence. The police will ask the victim if he or she wants an emergency protective order and will also ask if he or she wants to press charges. Even if the victim indicates that he or she does not want to press charges, the police will still make the arrest. The arrested party will be taken to jail and will be required to post bond in order to be released. If there were children present at the time of the incident, a copy of the arrest report will be sent to the Department of Public Social Services which will launch its own investigation.

Once a suspect has been arrested on suspicion of a domestic violence offense and is released from custody, he or she will be provided a future court date. Most police agencies have dedicated domestic violence units or detectives who investigate these types of offenses. Once an arrest report has been generated, a detective will be assigned to conduct an investigation. In many cases the detective will follow up with the alleged victim and may take additional statements from the victim, suspect or any other witness who was present. The suspect, through his or her attorney, can also present evidence to the detective.

If the detective believes that there is enough evidence to charge the suspect, the case will be submitted to the appropriate prosecuting agency for filing consideration. The detective will typically make a recommendation regarding what charges, if any, would be appropriate and whether or not the suspect should be charged with a felony or a misdemeanor. The detective may recommend that the suspect be charged with corporal injury to a spouse in violation of California Penal Code Section 273.5(a) PC, domestic battery pursuant to California Penal Code Section 243(e)(1) PC or one of several other domestic violence charges. The prosecution may conduct its own investigation when determining what, if any, charges to file.

If you or a loved one have been arrested for domestic violence, it is critical that you meet with with an attorney experienced in handling these types of cases immediately. Michael Kraut is a former Deputy District Attorney with over 14 years of prosecutorial experience who understands how to effectively defend clients charged with domestic violence. Unlike many other attorneys, Mr. Kraut does not wait until the first court date to start fighting these charges and in many cases Mr. Kraut’s early intervention has resulted in charges being rejected or significantly reduced.