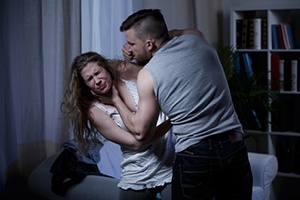 People are often surprised to learn that it is possible to be charged with a domestic violence even where no physical contact occurred. Under California Penal Code Section 422 PC, it is illegal to make criminal threats against another person. When these threats are made against a spouse, boyfriend or girlfriend, cohabitant or co-parent, the defendant can be charged with a domestic violence offense. Making criminal threats is a potential felony that can lead to prison sentences for those who are convicted.

The Elements of Criminal Threats

In order to be guilty of making criminal threats, the prosecution must be able to prove beyond a reasonable doubt that the defendant threatened to kill or cause great bodily injury to another person, that the threat was made orally, in writing or via electronic communication, that the defendant intended for his or her statement to be regarded as a threat, that the threat was clear, immediate, unconditional and specific and that it put the other person in reasonable fear for his or her safety.

Making criminal threats is what is considered a “wobbler” offense that can be charged as either a felony or a misdemeanor. If charged as a felony, the defendant can be sentenced to serve up to three years in prison. If a dangerous or deadly weapon was used in making the threat, the defendant can face an additional year in prison. The felony would be considered a “strike” under California’s Three Strikes Law that can be used to enhance future offenses. If charged as a misdemeanor, the defendant can be sentenced to up to a year in jail and whatever conditions of probation that the court chooses to impose.

Criminal Threats as Part of a Domestic Violence Case

In many cases, a domestic violence charge may include allegations that the defendant threatened to kill or seriously injure the victim. Even where there was no physical contact the defendant can be charged with criminal threats as a domestic violence crime. The victim and suspect do not even need to be in the same location, as criminal threats can be communicated electronically or over the telephone.

In addition, the prosecution will typically request that a protective order be issued at the time of the defendant’s arraignment. This protective order would remain in force while the charges are pending. Violation of the protective order can lead to new criminal charges under California Penal Code Section 273.6 PC.

There may be many defenses available to someone who has been charged with criminal threats. In fights between spouses or partners, there may be false accusations made regarding whether a criminal threat was made. In these cases, the defense can show how the “victim” may have exaggerated or lied to police.

In addition, if the threat was overly vague, was conditional or was not immediate the defense may be able to argue that the defendant did not violate California Penal Code Section 422 PC.

If you or someone you know have been charged with criminal threats, it is critical that you meet with a criminal defense attorney who understands how to defend these types of cases right away. As a former Deputy District Attorney with over 14 years of prosecutorial experience, Michael Kraut begins fighting right away on behalf of his clients who have been charged with criminal threats or any other domestic violence crime.