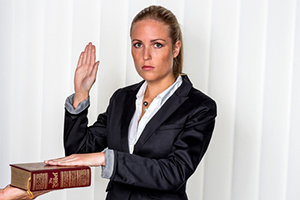 The majority of time spent in criminal trials and hearings in Los Angeles is on witnesses that come into court, take an oath, and testify in response to attorney questions. If there is an identification to be made, it is a witness making the ID. If there is an attack that must be described, it is a witness describing the attack. Even if the crime is captured on surveillance video, a witness must describe where and when the video comes from, and describe the connection between the video and the crime.

If there is a murder weapon, a witness must testify to where the weapon was found. One expert may testify about fingerprints, another about blood and DNA. If the judge believes the witnesses, the judge will rule favorably for the convincing witnesses. If the witnesses appear to be uninformed or dishonest, the judge will likely rule the other way. And if a jury finds a witness to lack credibility, that witness hurts their own side.

Can Witness Credibility be Discussed in Court?

Yes. Evidence Code § 785 allows for either party to an action to either attack or support the credibility of a witness. In a criminal case, the two parties are the prosecution and the defense. An accused person should expect to attack all the witnesses that are offered by the defense. And the accused person must rely on their own attorney to rehabilitate, or support, the credibility of defense witnesses, and to attack the prosecution witnesses.

Evidence Code § 780 specifically for witness credibility to be attacked in the following ways: Demeanor and Manner of Testimony

If a witness is nervous, overly careful in their story, jumpy, or keeps retelling details with slight changes, these are all things that can be pointed out to attack the credibitlity of a witness. The party supporting the witness can argue that testifying can be stressful, especially when an attorney is trying to make you look bad. The judge or jury may be convinced by the demeanor of the witness, or the arguments of the attorney. Attitude may be commented on as well. If the witness conveys that they do not wish to be present in court or to testify, that may bear on their honesty or the care they will take to recall facts accurately.

The Character of Testimony

Is the testimony bombastic? Fantastic? Confusing and odd? Perhaps it is mumbled. Or just outrageous. All of this may be commented on and argued about in court.

The Extent to Which the Witness Could Perceive, Recollect, Or Communicate

Was it too dark to really make an identification? Would it have been too loud to overhear a conversation? Witnesses may appear less credible even if they are very sincere, if they appear too sure of themselves, when the evidence does not have an obvious interpretation. If the witness is constantly forgetting some details, but not others, it could be that some details are simply more important, or that some details are invented. It is up to the attorneys to convey an interpretation to the judge and the jury. Evidence Code § 780 allows inquiry into a witness’s capacity and opportunity to perceive events. Opportunity might deal with distance, such that facts observed from a distance are less clear. Capacity might deal with focus, such that a person chatting in a crowded bar might not notice the prior tensions that led to a nearby bar fight.

Honesty, Bias, Interest, or Other Motive

An attorney may directly attack the witness’s honesty through past crimes or past dishonesty, with various limitations. But the attorney may also show that while the witness may be fairly honest, they may want a certain outcome. They may hate the accused person, or stand to receive money if the other party is out of the way. An attorney may point out how such motives and biases affect both perception and memory. If a witness has ever admitted to lying, that may be used as well.

A large portion of witness credibility rests in the hands of the attorneys. If you or a loved one has been accused of a crime, it is very important that you discuss your case with a Los Angeles Attorney immediately. As a former Deputy District Attorney with over 14 years of prosecutorial experience, Lawyer Michael Kraut is highly skilled at cross-examining witnesses and effectively presenting testimony.