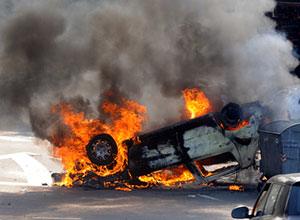 A person can be charged with disturbing the peace under California Penal Code Section 415 PC for a number of disruptive activities, including fighting, loud or unreasonable noise violations and using offensive words. Each variation of disturbing the peace requires a prosecutor to prove a unique set of factors.

To prove that a defendant disturbed the peace by fighting or challenging someone to a fight, a prosecutor must establish the following elements:

To prove that a defendant disturbed the peace by causing loud and unreasonable noise, the following elements must be present:

For someone to be guilty of disturbing the peace by using offensive words, a prosecutor must be able to show the following elements:

A man at a bar continues to receive dirty looks from another man throughout the course of a night. After a few hours, the man walks up to this other person and challenges him to a fight outside. This man could be prosecuted for disturbing the peace by challenging another to fight in a public place (the bar).

In another example, a political group reserves a section of a public park for a rally. The group obtains all necessary permits for this engagement. Because it is a large group, speeches are made on a stage over a loudspeaker. During the rally, other people at the park complain about the noise. The group could not be charged with disturbing the peace, as the noise was not malicious and the loud volume was required to communicate with the group at large.

In another example, a man approaches another man and calls him a racial slur. This other man becomes enraged and attacks the first man. This first man could be charged with disturbing the peace because he used words that were likely to provoke a violent outburst, whatever his intentions may have been.

4. Defenses to Disturbing the Peace

For those who engaged in fighting or similar activity in response to a viable threat of immediate harm to themselves or to someone else, they could legitimately claim self defense if they are ever charged with disturbing the peace.

In addition, this offense requires a willful violation. If someone disturbs the peace because they have a voice that carries or they did not realize another person was present, he or she would not be criminally liable for this offense.

If you or someone who know have been charged with disturbing the peace, it is crucial that you speak with an experienced Los Angeles Criminal Defense Attorney right away. The early involvement of an experienced and effective attorney may make the difference between criminal charges being filed altogether. As a former Deputy District Attorney with over 14 years of prosecutorial experience, Los Angeles Criminal Defense Attorney Michael Kraut is highly regarded as an attorney who fights hard to ensure his clients get the best defense possible.