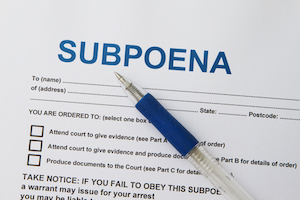 Defendants who are charged with felony or misdemeanor offenses typically do not have access to the same law enforcement resources to investigate as the prosecution does. There is a belief that witnesses may not be as cooperative with a criminal defendant as they would with the People. As a result of this, the law gives subpoena power to the defense in order to compel individuals or businesses to either appear in court or to produce the relevant material sought. In many cases, effective use of this subpoena power can be critical in providing a winning defense.

There are two different types of subpoenas available to defense counsel; a subpoena for a personal appearance in court and a subpoena duces tecum (“SDT”) that requires the target of the subpoena to produce the records requested and turn them over to the Court.

In many cases, a defendant will be aware of important witnesses who are not able or willing to come to court on the defendant’s behalf. In these cases, it is necessary to subpoena the witness to appear in court on a particular date. The subpoena has to be properly served on the target of the subpoena in order for it to be deemed valid. If the target of the subpoena fails to appear in court on the date listed on the subpoena, the judge can issue a warrant ordering the immediate arrest of the individual named in the subpoena. When witnesses are reluctant or hostile, it may be necessary to subpoena them to ensure their appearance in court. Even where witnesses plan on attending court, it is always wise to have them subpoenaed just in case. These witnesses can show the subpoena to their employers if there is a question about taking the day off and the subpoena also helps avoid any last-minute problems with actually showing up on the court date. In addition, if the witness is present in court, the judge can order that he or she appear on the next court date if the case is being continued. In these cases, it would not be necessary to re-subpoena the witness.

In many cases, an SDT is necessary to obtain records that would otherwise be considered private and unavailable to the defense. These records may be critical in mounting a successful defense. This can include medical records which can be used to disprove the prosecutor’s theory about a case, surveillance video that may be kept by an individual or business and may completely exonerate a defendant and cell phones/cell tower records which may be critical in showing that a defendant could not have been at the scene of a crime because his cell phone records show he was much further away.

In many cases, the target of the SDT will oppose the order and will have its own attorney appear to attempt to quash the subpoena. The judge may allow the defendant to discuss the case “ex parte” (outside the presence of the prosecutor) to inquire about the material requested and its relevance to the case. The judge may ultimately order the target of the SDT to turn over the requested material. In some cases, the material received may exonerate the defendant and the prosecutor may be willing to dismiss or significantly reduce the charges after viewing this material. Under the rules of discovery, the defense only has to disclose this material to the prosecutor if the defense intends on using this evidence.

If you have been charged with a criminal offense or are currently under investigation, it is very important that you meet with a Los Angeles Criminal Defense Lawyer right away. As a former Deputy District Attorney with over 14 years of prosecutorial experience, Los Angeles Criminal Defense Attorney Michael Kraut understands how to effectively investigate a case and build a defense by using the court’s subpoena power. Mr. Kraut works diligently to ensure his clients receive the best and most comprehensive defense possible.