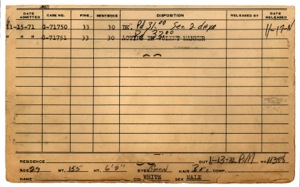 In California, certain contacts with law enforcement may be expunged from the official criminal records. In the past, it was much easier to have your past criminal record expunged. It is important to consult with an expungement attorney. The law on Southern California expungements significantly changed in at the beginning of 2008. Previously, in most cases, such as a Los Angeles DUI, if you had completed your probation and successfully complied with the terms the court ordered you to complete, you were entitled to an expungement. However, the law requires a full hearing before the court. In most cases, the prosecutor will be objecting to giving you a clean record. It will be completely up to the judge whether you will have your record expunged or not, and being properly represented can make the difference between whether you are successful on the motion.

The motion may require the calling of witnesses, and compliance with the evidence code will be required. You will need to file a formal motion, and may need to make legal arguments before the judge in order to be successful.

The expungement of either an arrest or a conviction is critically important to any person with a prior offense. There are two types of expungements. The first is more common, cleaning of a person's criminal records. The second type is the sealing of arrest reports and/or conviction information from the court's file and State records.

The cleaning of your record is important for helping you get gainful employment, allowing you to pursue or maintain most professional licenses, assisting in getting your right to vote back, and equally important, allowing you to move on with your life.

California Penal Code Section 1203.4 authorizes the court, after a full hearing, to expunge certain offenses if there was no state prison time served. An expungement does not totally change your record. Upon the court granting the order, then the plea of guilt or "no contest," or the verdict (if you had a trial), is set aside. However, you should be aware that an expungement does not erase a conviction for "prior" purposes. That means if you were charged with a DUI and your previous DUI was expunged; the prosecutor may still charge you with the prior DUI to enhance the sentence. In addition, you will still be required to inform state licensing agencies of the conviction. You also may or may not be able to own or possess a gun.

Whether you can get an expungement depends upon the offense for which you were convicted (misdemeanor or felony) and the sentence that was imposed by the court (probation or prison sentence). There are other factors that apply, and for that reason it is important to consult with an expungement attorney.

If you were convicted of a felony, then an additional motion will need to filed with the court to first lower the offense to a misdemeanor, if possible, and then expunge the offense.

Juvenile crimes may also be expunged. And, if granted, your child's past will be behind him/her and may not be revisited by the prosecutor or court in the future.

If you need to have your criminal record expunged for a work related reason, or if you just want to clean up your record in Los Angeles, Riverside, San Bernardino, or Orange County, it is important that you seek the services of a criminal defense attorney with extensive experience with these types of cases. If you want your case expunged whether it is a felony or a misdemeanor in the Los Angeles or Southern California area, call Michael Kraut. Mr. Kraut understands the serious nature of this offense, how best to defend you, and how to resolve your case without you going to jail. Mr. Kraut has extensive knowledge of the law and the legal system. He has developed excellent relationships with law enforcement and law officials throughout the Los Angeles and Southern California.

For more information about the various ways to have your criminal record expunged, and to schedule your free consultation, contact Michael Kraut at the Kraut Law Group. Mr. Kraut can be reached 24/7 at 888-334-6344 or 323-464-6453.

Los Angeles Criminal Defense Attorney Blog - Expungements
Share |
Free Consultation
Criminal Law Information Center
Client Reviews
★★★★★
Michael Kraut is outstanding! He genuinely cared about my case and instructed my mom and I throughout the entire process. He was very clear on what he needed in order to receive the best results. He kept us updated until the end. I thank him so much for getting my charges rejected. I highly recommend him to anyone with legal needs! Shaquan
★★★★★
I contacted Michael with concern for my personal and business reputation. He was very reassuring and confident the entire time. After about 3 weeks it was determined that no charges were being filed by any agency and I was in the clear of any investigation. One thing that is amazing is just how FAST Michael is at replying to phone calls, texts, and even emails! We are talking under 30 minutes in most cases. That is unheard of for most attorneys! Michael is incredible and not your typical run of the mill attorney. For best results hire him if you feel like you might be under investigation or could face charges. Even if you know you are innocent it is best to take care of the smoke before it becomes a fire. Brad
★★★★★
Michael Kraut is-hands down-the best criminal defense attorney and I can't begin to thank him for all that he did for me and my family. I reached out to him in the middle of the night and less than a couple hours later, he had gotten back to me and scheduled a meeting. He's a no-nonsense attorney who knows how to get the job done! From the second we retained him, I had peace of mind in knowing that we were in the best hands possible. If Michael Kraut couldn't get it done, I knew that it couldn't be done at all. You can't put a price tag on your freedom. He was worth every single penny. Lida
★★★★★
Michael Kraut is an outstanding attorney. He was extremely professional, and straightforward, yet sensitive with my case. I am confident I made the right choice by hiring Michael. I highly recommend him to anyone seeking a truly experienced lawyer. Daniel
★★★★★
Michael Kraut - I cannot thank you enough for all that you did for ​my son. When I came to you I read that you used to be a district attorney but I never knew how much that meant until I watch you in court. I knew it took 3 months but the final day when I heard the judge say that all charges were dismissed it was all worth it! I will always be grateful for all that you did for us. A.N.
View More
Submit a Law Firm Client Review