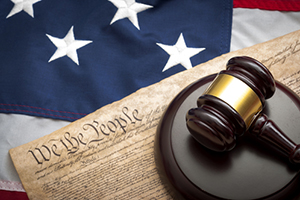 The primary protection for all criminal defendants in Los Angeles comes from the enforcement power of the United States Supreme Court. While the parameters of what is a crime and how it will be punished is left to the states, the core rights enumerated in the constitution must be protected, and the Supreme Court has the power to enforce each right found in the Constitution. The Supreme Court is created by Article III of the constitution, and section 2, clause 3 creates the right to a trial by jury, as well as ensuring that each state has jurisdiction over crimes committed within its borders.

The First Amendment to the United States Constitution limits the ways in which the government can criminalize speech and assembly. That means, for the most part, an individual cannot be punished by the government for words that are spoken, or for gathering in public to protest. This is not absolute, and there are some exceptions. In California, it is a crime to threaten another person, and words can form part of a crime in behaviors such as stalking. Also, while the right to gather in public to protest is protected, government can place limits on the time, place, and manner of the protest. Arrests can follow for protests deemed illegal.

The Fourth Amendment covers searches and seizures. A “seizure” may be when the government takes property. But in the criminal context a seizure generally refers to a person being arrested. The Fourth Amendment lays out the requirements for warrants. It requires that warrants must issue upon probable cause supported by oath or affirmation, particularly describing the place to be searched or the person to be seized. This means that a warrant must lay out the relevant criminal activity, and the officer creating it must swear to the facts before the warrant is presented to a judge.

An arrest warrant must be specific as to the person to be arrested, and on what authority. And a search warrant must state the crime being committed, why a location may have evidence of that crime, what form the evidence might take (drugs, a stolen car, bank statements), as well as the address to be searched. A great deal of U.S. Supreme Court law comes from determining when police officers can search or arrest without a warrant. But even without a warrant, all the exception must relate reasonably to the protections provided by the Fourth Amendment. If the Fourth Amendment requirements are not met, all the evidence can be suppressed.

The Fifth Amendment covers even more well-known rights than the Fourth Amendment. The protection from being placed in double jeopardy is created by the Fifth Amendment. This means that once you begin a trial, you cannot be brought to trial again for the same crime unless the judge properly declares a mistrial. This is where Grand Jury rights in Federal capital cases arise as well.

The Fifth Amendment declares that no person may be deprived of Life, Liberty, or Property without Due Process of law. There is no simple definition of Due Process, but it broadly means that the law must be respected for each and every person who is taken into custody or has property taken from them. There is procedural Due Process, which means that the rules of court and proper notices must all be respected. There is also substantive Due Process, which requires that the justice guaranteed by the Constitution must not be withheld from any person, and courts must not allow bureaucratic hurdles to prevent meaningful justice.

The Right to Remain Silent

The right to remain silent may be the most famous constitutional right, due to its popular presence in entertainment mediums. This right comes from the Fifth Amendment declaring that no person may be compelled to be a witness against himself in a criminal case. This protection has developed into the first half of the Miranda Warning, where arrested individuals are told that they do not have to speak with police, but if they do, what they say can be used against them in court.

The second half of the Miranda Warning comes from the Sixth Amendment. This is where officers tell arrested individuals that they have a right to a lawyer while they are being questioned, and that they may have an appointed lawyer even if they cannot afford to pay anything. In addition, the Sixth Amendment provides that criminal trials will be public, and will be prompt, not requiring a defendant to spend many months in jail without a remedy. This amendment requires that juries be impartial and from the state where the individual is being tried. The right to an arraignment is guaranteed, to be informed of the charges being brought without delay or secrecy. This is also where defendants are granted the right to subpoena witnesses into court, as well as the right to confront, generally through cross-examination, each witness that makes accusations in court.

Article IV, Section 2 of the Constitution protects the privileges and immunities of every citizen at a Federal level. The Fourteenth Amendment extends these protections and limitations to every state within the Union. It draws together Due Process, Equal Protection, and the protections of Life, Liberty, and Property, and ensures that the States do not abridge such rights where the federal government could not. And it places the Supreme Court in a position to enforce each of these rights, even against state and local governments.

If you have been accused of a crime, it is important that you consult with a Los Angeles Attorney right away. Attorney Michael Kraut is a former Deputy District Attorney with over 14 years of prosecutorial experience who understands how to effectively protect the constitutional rights of his clients.