Arrested While Protesting in Los Angeles 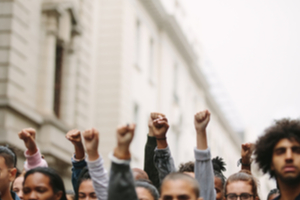 It is a common occurrence. A student attends a march for an issue she cares deeply about. She believes that she is in compliance with every law. She has no criminal record. But suddenly she finds herself in handcuffs, being transported to the county jail. She has no idea how it will affect her employment opportunities, her schooling, or any future application.

An independent blogger believes that it is important to cover the voices of the people marching in the street. He does not have official press credentials but he takes his obligation seriously, to impartially document the events as they develop. He remains on the front lines of a protest to share the most crucial and relevant information with observers across the world. Then he finds himself on the ground with a face covered in pepper spray. Worse yet, he is handed a citation to appear in court on a criminal case. He is threatened with an arrest warrant if he does not show up to court.

Disparate treatment of people of color is a defining theme of American history, and Los Angeles carries many of the key flashpoints. The 1965 riots in Watts, a Los Angeles Neighborhood, reminded the nation that racial unrest was not confined to Alabama and the South, but was a reality for all cities. The Watts Riots began the late 20th Century approach to policing oppressed communities. This approach involved military planning that would utilize the National Guard and undercover officers to assist regional police forces. These tactics were utilized three years later, when the entire nation erupted in protest over the assassination of Martin Luther King, Jr.

This national planning created tactical support for law enforcement policies designed to keep African American communities confined. This approach allowed cities to publicly declare their support for racial equality, while maintaining harsh policing tactics, knowing that an overwhelming federal response was available to quash dissent. Los Angeles allowed that disconnect, and was again at the center of confronting injustice when massive protests broke out in response to the Rodney King beating and the subsequent impunity enjoyed by the officers responsible. Rioting ensued, the frustrated residents of LA’s brutalized neighborhoods knowing that their safety was of little concern to the power structures that ruled their lives.

George Floyd’s death has now sparked the greatest national protest since the death of Martin Luther King, Jr. The video of his death seemed to embody the history of racial oppression in the years since then, when, after the promise of change brought about by the Civil Right Movement, decades passed without substantive progress. George Floyd laid on the ground, three police officers on top of him. One officer, with hands in his pockets, casually placed all of his weight onto his own knee, which was pressed against George Floyd’s neck. As Floyd begged to breathe, as shocked bystanders began to cry out and plead for Floyd’s life, the officer remained calm, secure in the fact that his arrest methods were of higher priority than Floyd’s access to oxygen.

As if to represent the history of oppression, the police officer ignores the suffering of the black man below his knee, and could not be bothered to moved even a few inches to save Floyd’s life. The only moment that caused the officer to take his hands from his pockets was when a bystander came too close with a camera. Then the officer pulled out pepper spray and threatened the bystander, seeming to nearly forget that Floyd was approaching death below. Floyd became unconscious, and still the officer crushed Floyd’s neck with his knee. The loss of consciousness, the loss of life, was a common thing. It required no action, no comment, no movement, and the other officers merely directed traffic to allow the death to occur without bother.

What Crimes Could I be Charged With for Protesting in Los Angeles?

On of the most common arrest charges at a protest involve failure to disperse. This charge comes in two forms. The first, Penal Code § 409 involves Failure to Leave After a Warning. This is the way that LAPD and LA Sheriff perform mass arrests, particularly after a curfew is declared. The second form is Penal Code § 416, Failure to Disperse, which requires that the arrested party intended to commit a crime. Of course, that intent will be proved with surrounding evidence, like whether the person was in a group of people nearby fires or graffiti.

Vandalism under Penal Code § 594 can involve graffiti, breaking windows, or even destroying police barriers. It can be charged as a felony or a misdemeanor.

There are many versions of theft, and many ways that individuals can be charged with both misdemeanor and felony charges. However, when a state of emergency has been declared, stealing can be classified as looting, with increased penalties.

When rioting begins, fires inevitably start. While very few people would ever intend to burn down a building, an arson charge can follow from burning objects, even trash. A campfire may begin as a place for protesters to gather, but a video of an individual feeding the fire with debris, perhaps with a traffic cone or the contents of a nearby dumpster, could lead to serious felony strike charges that would have devastating lifelong consequences.

As a result, it is important to speak with an experienced Los Angeles Criminal Defense Attorney immediately if you or someone you know have been arrested while protesting. As a former Deputy District Attorney with over 14 years of prosecutorial experience, Los Angeles Criminal Defense Attorney Michael Kraut is highly respected throughout the court system as a passionate advocate for his clients.