Communication With Law Enforcement During a DUI Stop 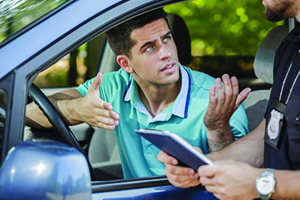 After a vehicle has been pulled over, the officer will speak with the driver and engage him or her in communication. This is a critical part of all vehicle stops and usually this is the point at which an officer will determine whether or not a DUI investigation is warranted or whether the driver should be cited or verbally warned about his or her driving conduct. People often want to know how to act and what to say during this initial interaction, especially when asked about drinking or drug use. How a driver responds is often critical to whether or not he or she is investigated or arrested for driving under the influence.

Should a Driver Admit to Drinking?

Once an officer has pulled over a vehicle, he or she will approach the driver and will ask the driver questions. The officer will ask to see the driver’s license as well as proof of registration and proof of insurance. The officer will typically ask a driver if he knows why he or she has been pulled over. An officer must have reasonable or probable cause to stop a vehicle and the reason is usually a violation of the Vehicle Code that the officer observes the driver commit, such as speeding, failing to signal, or failing to stay within lane demarcations.

When speaking with the driver, the officer will be looking for evidence of intoxication such as bloodshot or watery eyes, slurred speech or the odor of alcohol. During this initial conversation, the officer will often ask the driver if he or she has been drinking.

Any statement that the driver makes can be used against him or her if later charged with DUI. Thus, an admission to drinking can be detrimental to a driver and can almost guarantee that the driver will be asked to perform field sobriety tests or submit to a breath test on the officer’s preliminary alcohol sensor. These are voluntary tests, however the driver’s admission that he or she consumed alcohol may provide enough probable cause to arrest the driver for DUI.

Should a Driver Deny Drinking?

It is never a good idea to be untruthful during an interaction with a law enforcement officer. If the officer notices telltale signs of alcohol consumption, denying alcohol consumption will not prevent the officer from expanding the DUI investigation or arresting the driver on suspicion of DUI. This untruthfulness may be viewed harshly later on by prosecutors when evaluating the case; especially where the driver later tested positive for alcohol.

How to Answer When Questioned about Drinking?

How a driver should respond when asked about alcohol use depends on the specific circumstances and should always choose his or her words carefully, as there is no such thing as a casual conversation with law enforcement officers during a DUI investigation. It is always a good idea to be courteous to officers during a traffic stop and not to aggravate the officer. When asked about drinking, drivers can respond by saying “I have anything to say regarding that” or something similar.

The officer may still believe there is justification to conduct a full DUI investigation. If the officer smells alcohol or otherwise believes that the driver is under the influence of drugs or alcohol, the driver may ultimately be arrested on suspicion of DUI regardless of what is said to the officer.

If you have been arrested for a DUI offense, it is imperative that you speak with a skilled DUI defense attorney as soon as possible. Michael Kraut is a former Deputy District Attorney with over 14 years of prosecutorial experience who understands how to effectively defend DUI clients in Court and before the DMV.