DUI law is the same throughout Los Angeles and Southern California, and the consequences are the same for driving under the influence of alcohol or drugs. For that reason it is important to hire a Los Angeles DUI defense attorney who has been practicing DUI law for years and has inside knowledge of both the system, and how law enforcement assembles their case against you. Attorney Michael Kraut has was a prosecutor for over 14 years and handled hundreds of DUI cases when the driver was under the influence of drugs.

The "drugs" may be either illegal, prescription or over-the-counter, taken with a doctor's order. Many people think that just because you have a prescription or that the drugs are over the counter prevents them from being arrested for a Los Angeles DUI. This is simply not true. Many of the legal drugs sold carry a warning that a person should not drive a motor vehicle while taking the medicine.

When a person is charged with having a DUI with alcohol and the chemical test indicates that the person has .08% or more alcohol in his or her blood, the officer can immediately suspend the driver's license. But when a person is driving under the influence of drugs, the DMV cannot administratively suspend the person's driver's license. The suspension can only occur by the DMV if there is a refusal or the BAC is .08% or higher. However, once the person is convicted of DUI with drugs, then the license may be suspended. 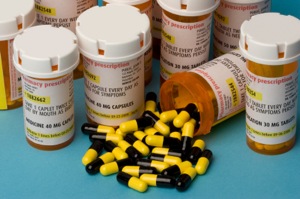 There is no breath test in a DUI drug case. The officer may administer either a blood or urine test. In order for the prosecution to prove its case, it must prove that a defendant was driving under the influence of the drug(s). The officer's testimony of the driver's physical appearance, erratic behavior (both before he or she was pulled over and after the officer made contact with the person) and statements concerning drug use will be entered into evidence. The chemical analysis will also be introduced to the jury.

It is much more difficult for the prosecution to prove this charge than driving under the influence of alcohol. Many officers have not been properly trained on the objective signs of a person under the influence of various drugs. For this reason a well qualified DUI defense attorney will often be able to attack the "science" behind the DUI case.

There can be severe consequences for someone convicted of a DUI case with illegal drugs. The person will have to deal with the drug case as well as the DUI charge. A person convicted my have to register with his or her local police as a narcotics offender, he or she may loose a job or security clearance, and the fines can be substantial.

If you have been arrested or charged with a DUI offense because law enforcement believes that you were under the influence of drugs in the Los Angeles or Southern California area, contact Michael Kraut. Mr. Kraut understands the serious nature of this offense, how best to defend you, and how to resolve your case without you going to jail. Mr. Kraut has extensive knowledge of the law and the legal system. He has developed excellent relationships with law enforcement and law officials throughout the Los Angeles and Southern California.