Pulled Over for Equipment Violations in Los Angeles 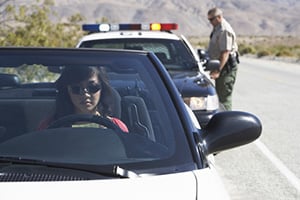 Many driving under the influence arrests begin when a law enforcement officer pulls over a driver after observing the driver commit a violation of the law. The violation does not have to be related to impaired driving but the officer must have reasonable or probable cause to stop the driver and the traffic stop cannot be based on a hunch. Typically, the reason for the stop will be an observed violation of a traffic law, such as speeding or failing to stay in one’s lane. Officers can also pull drivers over for equipment violations, such as a missing license plate or faulty brake lights.

Many drivers are surprised to learn that they can be arrested for DUI after being pulled over for an equipment violation, which has no connection to impaired driving. The fact that a driver’s vehicle is missing a license plate, has window tinting that is too dark or has another kind of correctible error is not evidence that he or she is under the influence of alcohol or drugs. Many drivers believe they can only be investigated for a DUI if they are swerving or driving recklessly, which is not the case. An officer is allowed to stop a vehicle for any observed violation of the Vehicle Code or other law, which includes equipment violations.

Once a driver has been stopped for an equipment violation, the officer can only conduct a DUI investigation if there is reasonable suspicion to believe that the driver is under the influence of drugs or alcohol. The officer will engage the driver in conversation and will likely ask about the observed equipment violation. During peak DUI times such as at night, during weekends and over holidays, law enforcement officers will be looking for certain indicia of intoxication while speaking with the vehicle’s driver. The officer will be looking for symptoms such as bloodshot and watery eyes, slurred speech and an odor of alcohol. If the officer suspects that the driver may be under the influence of drugs, he or she will be looking at the driver’s pupils and will be suspicious if the driver appears overly jittery or lethargic.

Suspected of Drinking or Using Drugs

If the officer suspects that the driver has been drinking or using drugs, the driver will be asked to participate in a series of field sobriety tests that are designed to measure a person’s coordination, balance and ability to follow instructions. If the officer suspects that drugs are involved, a drug recognition expert (“DRE”) officer who has received training in recognizing drug intoxication may be called to assist in the evaluation of the driver. The officer also may ask the driver to provide a breath sample on his or her portable preliminary alcohol sensor (“PAS”) device.

If the officer has probable cause to believe that the driver is under the influence of drugs or alcohol, the driver will be arrested and taken to the police station or hospital for further chemical testing. If the vehicle can be driven safely, the officer may allow a sober friend or passenger to drive the vehicle away, otherwise it would be towed.

The driver can challenge the basis of the vehicle stop by filing a motion to suppress evidence pursuant to California Penal Code Section 1538.5 PC. If granted, all resulting evidence from the vehicle stop would be excluded and the case would likely be dismissed, as the prosecution would be unable to proceed.

If you have been arrested for DUI after being stopped for an equipment violation, it is crucial that you speak with a Los Angeles DUI lawyer immediately. Michael Kraut is a former Deputy District Attorney with over 14 years of prosecutorial experience who fights hard on behalf of his clients charged with DUI.