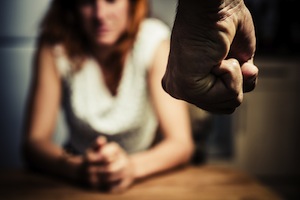 California Penal Code Section 273.5(a) PC makes it illegal to injure a spouse, cohabitant or fellow parent in an act of domestic violence. This offense is also referred to as domestic abuse, domestic violence, or corporal injury to a spouse.

To prove that a defendant committed the crime of inflicting injury on a spouse, cohabitant or fellow parent resulting in a traumatic condition, a prosecutor must be able to establish the following elements:

A traumatic condition is a wound or other bodily injury, whether minor or serious, caused by the direct use of physical force. Cohabitants, as used in the statute, means more than roommates and instead describes a relationship of two people living together for a substantial period of time. A person can cohabit with more than one person at the same time.

A man and his wife get into a domestic dispute after an argument about finances. The man strikes the woman and she calls 911. When officers arrive they hear the woman's account and see that she has a visible black eye. This man could be prosecuted for corporal injury to a spouse as he physically struck his wife and the attack caused a traumatic condition.

In a similar example, the wife calls 911 to report a domestic violence incident to police. When police arrive, the wife tells the officers that her husband physically pushed her, but she was not hurt and did not suffer any injury. In this situation, corporal injury charges would probably not apply because there was no traumatic injury. However, the husband could still be charged with domestic battery in violation of California Penal Code Section 243(e)(1) PC.

4. Defenses to Corporal Injury to a Spouse

As with many offenses involving acts of physical harm, a person is allowed to use force to defend themselves or others from an immediate threat of violence or harm. This right of self-defense applies to domestic violence cases and may be a viable defense if the spouse had to use physical force to protect him or herself or the children.

As with many incidents involving domestic disputes, corporal injury to a spouse is a criminal offense that is highly susceptible to false accusations made by one party hoping to get their partner in trouble. Unfortunately, once an allegation has been made, police and prosecutors will often go forward even if the accuser regrets their actions and wishes to recant. In these cases the assistance of an effective Los Angeles Criminal Defense Attorney can be crucial in helping convince police and/or prosecutors that the alleged crime did not occur.

Corporal injury to a spouse is a "wobbler" offense that can be prosecuted as either a felony or a misdemeanor. Prosecutors typically review the level or harm or force used, the defendant's criminal history, and other factual circumstances when deciding whether to file felony or misdemeanor charges. If charged as a felony, a defendant can be sentenced to up to four years in prison (with an additional five years possible if great bodily injury has been inflicted) and have a possible strike on their record. Under California's Three Strikes Law, this conviction could be used to enhance future convictions. In addition, a person would lose their ability to own or purchase firearms.

6. Criminal Defense for Corporal Injury to a Spouse Cases

Corporal injury to a spouse is a domestic violence offense that may arise from a moment of anger but carry lifelong consequences. If you or a loved one have been arrested for this offense, it is very important to meet with a Los Angeles Criminal Defense Attorney right away. Los Angeles Criminal Defense Attorney Michael Kraut is a former Deputy District Attorney with over 14 years of prosecutorial experience who has both prosecuted and defended charges of this nature. As a result, Mr. Kraut has a unique perspective that sets him apart from many other criminal defense attorneys. Mr. Kraut it highly regarded throughout the court system as a tough and knowledge advocate for his clients.