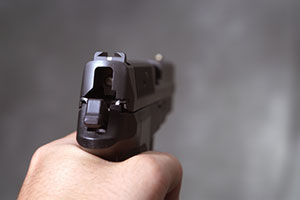 Under California Penal Code Section 417 PC, it is a crime to publicly brandish a weapon or firearm. While California permits citizens to own firearms and other dangerous weapons, there are specific laws pertaining to how one can use, carry and display these weapons, and violation of these laws can result in criminal penalties.

To prove that the defendant brandished a weapon or firearm, a prosecutor must be able to establish the following elements:

A deadly weapon is any object, instrument or weapon that is inherently deadly or that is used in such a way that it is capable of causing and likely to cause death or great bodily injury.

Two men at a sporting event get into a passionate argument regarding their respective teams. At one point, one man becomes so enraged that he pulls a gun from his waistband and waives it around the air in a threatening manner. This man could be prosecuted for brandishing a firearm.

In another example, two old friends meet in a public park. One man is excited because he has just purchased a new samurai sword. The man removes this sword from its package and shows off the sword by swinging around in the air. A woman passing by becomes very frightened and calls the police. The man with the sword would not be criminally liable under the statute because he did not brandish the weapon in a rude, angry or threatening manner, but rather to show it off to his friend.

4. Defenses to Brandishing a Weapon or Firearm

A person in California is allowed to brandish a weapon or firearm as a means of defending himself or another person. For example, a man is walking down a deserted street late at night when he is approached by a group of young men who demand his wallet. The man pulls out a gun and the young men run away. If the man is charged with brandishing a weapon, he has a legitimate self defense claim because there was an immediate threat to his physical safety.

Depending on the factual circumstances, brandishing a weapon can be either a misdemeanor offense or a "wobbler" that can be charged as either a felony or a misdemeanor. Brandishing a deadly weapon is a misdemeanor offense that is punishable by a minimum of 30 days and a maximum of six months in jail. If the deadly weapon is a firearm, the defendant faces a three to six month jail sentence. And if the defendant brandishes a firearm that is concealable (such as a pistol or revolver) in a public place, there is a minimum of three months and a maximum of one year in jail. The three months to one year jail sentence is also applicable if the victim of the offense was cleaning graffiti at the time someone brandished a weapon.

If the defendant brandished a firearm in the presence of a peace officer who is performing a lawful duty, that defendant can be sentenced to a minimum of nine months and a maximum of a year in jail if charged as a misdemeanor and up to three years in prison if charged as a felony.

6. Criminal Defense for Brandishing a Weapon or Firearm Cases

If you or someone you know have been charged with brandishing a weapon or firearm, it is critical that you consult with a Los Angeles Criminal Defense Attorney right away. Los Angeles Criminal Defense Attorney Michael Kraut is a former Deputy District Attorney with over 14 years of prosecutorial experience who aggressively fights charges of this nature. Mr. Kraut is highly respected throughout the court system for his legal knowledge and impressive litigation skills. Mr. Kraut works tirelessly to make sure his clients receive the be st defense possible.