California Penal Code Section 245(a)(2) PC: Assault With A Firearm 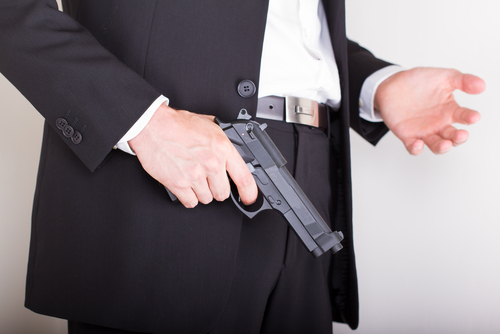 Just as assault with a deadly weapon is considered a more serious crime than simple assault, use of a firearm in an Assault case will enhance penalties even further. Assault with a firearm is a very serious felony offense under California Penal Code Section 245(a)(2) PC.

To prove an allegation of assault with a firearm, a prosecutor must be able to establish the following elements:

No injury or firing of the firearm is required under the statute. A firearm is defined as any device designed to be used as a weapon, from which a projectile is discharged or expelled through a barrel by an explosion or other form of combustion. A firearm can also include a semiautomatic firearm, a machine gun, an assault weapon or a .50 BMG rifle.

A man points a firearm at another person, however the gun is not loaded. This man could not be convicted for assault with a firearm under California Penal Code Section 245(a)(2) PC because the man lacked the present ability to actually commit a violent injury.

However, if the same man takes the unloaded gun and uses it to pistol-whip the other person, he then could be charged with assault with a firearm.

4. Defenses to Assault with a Firearm

As discussed, a firearm has to be operable for someone to be convicted of assault with a firearm. If the gun was not loaded or operable, this may be a complete defense against any criminal prosecution.

A defendant is entitled to use force against another in self defense if faced with a threat of imminent and immediate harm to themselves or another. This act of self-defense can sometimes involve a firearm.

Assault with a firearm is an offense that can be sentenced differently depending on the type of firearm used and the class of victim involved.

If the firearm was a machine gun, assault weapon or .50 BMG rifle, the defendant can be sentenced to 12 years in prison. If the weapon was a semiautomatic firearm, the maximum prison sentence is nine years.

A conviction for assault with a firearm is considered a “strike” under California’s Three Strikes Law and can be used to increase penalties on future convictions. Defendants convicted of this offense will likely lose their right to own or purchase firearms for life.

6. Criminal Defense for Assault with a Firearm Cases

A conviction for assault with a firearm can cause serious lifelong consequences. It is therefore very important to consult with a Los Angeles Criminal Defense Attorney right away if you or a loved one is under investigation for this offense. As a former Deputy District Attorney with over 14 years of prosecutorial experience, Los Angeles Criminal Defense Attorney Michael Kraut is highly adept at handling serious felony cases of this nature. Mr. Kraut understands the serious consequences associated with these charges and works tirelessly to ensure that his clients get the absolute best defense possible.