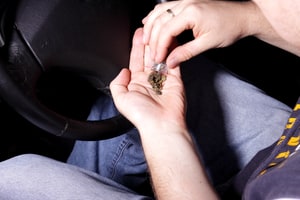 Studies Regarding Marijuana Use and Driving

The National Highway Traffic Safety Administration (“NHTSA”) has conducted numerous studies about the effects of alcohol on a person’s ability to drive a vehicle. Because marijuana is still considered an illegal substance by the Federal government, there have not been the same kind of studies performed in regards to marijuana use and driving. However as more states legalize or decriminalize marijuana, there is more evidence regarding marijuana’s effect on a person’s driving ability.

Recently, the National Institute on Drug Abuse conducted a study regarding marijuana and driving performance. The study involved 18 occasional marijuana smokers who engaged in tests in a driving simulator. The study looked at the test subject’s performance while under the influence of alcohol and while under the influence of marijuana. Marijuana users did show an increase in weaving and those who had THC blood concentrations of 13.1 ug/L had similar weaving behavior as drivers with a BAC of 0.08 percent.

There may be a number of defenses available to someone who has been charged with driving under the influence of marijuana. If the driver was driving safely and if there is a low THC concentration in the driver’s blood sample, the defense may be able to argue that the driver was not, in fact, under the influence of marijuana at the time of driving. Marijuana can stay in a person’s system for several days and the defense may be able to show that the intoxicating effect of marijuana had worn off by the time the defendant was driving. In these cases, the prosecution may be willing to dismiss the DUI charge or offer a reduced DUI charge, such as wet reckless, reckless driving or exhibition of speed.

Marijuana and the Driver’s License Suspension

Unlike DUI offenses involving alcohol, the DMV will not issue an administrative suspension for drivers who are under the influence of marijuana or other drugs. The automatic suspension issued at the time of the arrest will often be set aside when the driver’s blood tests come back positive for marijuana but show that the driver did not have a BAC of 0.08 percent or higher.

However, the driver may still have his or her driving privileges suspended if they are convicted in court of any DUI offense under California Vehicle Code Section 23152 VC.

If you have been arrested for a DUI offense involving marijuana, it is crucial that speak with an experienced DUI attorney immediately. Michael Kraut is a former Deputy District Attorney with over 14 years of prosecutorial experience who fights hard on behalf of his clients charged with DUI marijuana offenses.