Can I Choose Which Chemical Test to Take? 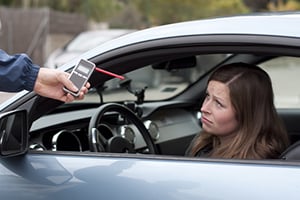 When a driver is arrested on suspicion of driving under the influence, he or she will usually be given the choice between taking a breath test or a blood test. There are times when the driver will not be given a choice and will be required to take a blood test. Drivers often want to know which chemical test they should take or should they refuse testing altogether.

Before testing, the driver will be informed that refusing to test will result in a yearlong driver’s license suspension and criminal charges. In California, it is against the law to refuse chemical testing if lawfully arrested. Drivers who refuse can still be charged with driving under the influence and can face additional penalties with the Court and DMV as a result of the test refusal, including mandatory jail time and a yearlong driver’s license suspension. In some cases, officers might get a warrant for a blood draw when a driver refuses testing.

The breath test is quicker, less invasive and simpler than the blood test, and officers often encourage drivers to take the breath test because it is easier for them to administer. The breath test requires the driver to provide breath samples into a Breathalyzer machine which provides instantaneous results.

Drivers who recently consumed alcohol may prefer a breath test. The breath test is often administered shortly after the defendant has been driving and may not account for any “rising blood alcohol” effect.

In some cases, the driver may be physically unable to provide a suitable breath sample. This may be the case if the driver suffers from certain medical conditions. In many cases, officers will treat these “insufficient sample” situations as refusals and the driver can face a yearlong driver’s license suspension and enhanced penalties in court.

Drivers are given the option of taking a blood test. This test usually cannot be administered at the station so typically the driver must be taken to a hospital or laboratory so a certified professional perform the blood draw. The results of the blood test are not immediately known. In some cases, it may take several hours before the police can arrange for a blood draw, during which the driver’s BAC may fall below the 0.08 percent threshold. There also may be issues with how the blood sample was handled or tested that may be raised by the defense in court.

In any DUI blood test, a small portion of the blood sample will be reserved for future retesting. The defense can request a blood split order to allow retesting of the blood sample at an independent laboratory at the defendant’s expense. This retesting may provide different results than the criminal laboratory and may show that a drug detected in a defendant’s blood sample was not present in an amount that would be considered intoxicating. In these cases, it may be necessary to have an expert testify regarding the retesting.

If you or someone you know have been arrested for DUI, it is critical that you speak with a qualified DUI lawyer immediately. Michael Kraut is a former Deputy District Attorney with over 14 years of prosecutorial experience who is highly respected for his knowledge of DUI law and his tenacity as a litigator.

For more information about DUI and choosing which chemical test to take and to schedule your free consultation, Mr. Kraut can be reached 24/7.