When can an Officer Stop and Search a Car? 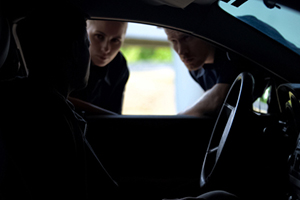 The Fourth Amendment to the United States Constitution states that “The right of the people to be secure in their person, houses, papers, and effects, against unreasonable searches and seizures, shall not be violated, and no Warrants shall issue, but upon probable cause…” For a search of a home, a search warrant is required, unless a specific recognized exception can be articulated. Motor vehicles did not exist at the time of the writing of the constitution, but a pedestrian was similar in some respects. A police officer might argue that when there was probable cause to believe that a crime had been committed, and a person was holding evidence or contraband, the person’s mobility and ability to destroy evidence made a warrant untenable. The greater mobility and regulation of vehicles further called into question the need for a warrant.

The Automobile Exception is now a recognized principle. A police officer in Los Angeles may stop and search a vehicle without a warrant signed by a judge. Automobiles are mobile and can rapidly be moved from one place to another. Furthermore, automobiles are heavily regulated, which puts anyone in a vehicle on notice that that are not in absolute control of their vehicle’s movement. A driver must be licensed by the state, and a car must be registered and insured. A car must follow the rules of the road, and must comply with all signs, signals, and necessary detours.

While modern citizens carry many “papers and effects” in their vehicles, it is well known that any vehicle may be stopped by a police officer, often for minor violations of the vehicle code. But a stop cannot be based on the whim of an officer. The officer must have reasonable suspicion to stop a vehicle, otherwise the stop is invalid, and any evidence and observation by the officer may be ruled inadmissible in court at a suppression hearing. Reasonable suspicion means that the officer can point to some facts that logically imply a violation of the law.

Probable Cause and Vehicles

If an officer has a strong hunch that a car is full of drugs, and if that officer pulls over the car for a broken taillight, that car still cannot be searched if there is no actual evidence of drugs that the officer can identify. However, if an officer sees a pipe on the floor that has burn marks and white residue, and if they officer is familiar with the type of pipe as one used to smoke methamphetamine, that may give rise to probable cause.

Probable cause arises when specific facts make it fairly clear that a crime has been committed. Probable cause comes from facts that, if presented to a judge, would be convincing enough that a judge would issue a search warrant for the car. However, because the car is mobile and subject to heavy regulation, the automobile exception allows the officer to search without first requesting a warrant from a judge.

The principles of reasonable suspicion and probable cause attempt to create standards that survive objective review and remove criminal investigations from the subjective hunches of police officers. However, there is still a great deal of subjective inferences that go not only into the fact selected by an officer, but also into the way in which the officer emphasizes and describes the facts in later reports and courtroom testimony.

It takes an experienced defense attorney to recognize inaccuracies in officer investigations, and to reveal where subjective biases are presented as objective fact. The ability to identify problems with the probable cause for a search, or the reasonable suspicion for a stop, are key negotiating points that lead prosecutors to reduce their plea deal offers. An attorney with a proven track record as a legal scholar and a successful advocate for evidence suppression comes into negotiations from a position of strength that not many defense attorneys can master.