DUI and the Accident Report 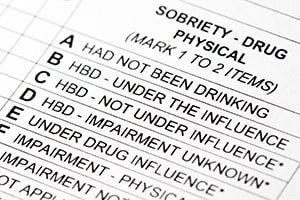 Whenever a suspect is arrested on suspicion of a DUI offense, the arresting officer will compose an incident report detailing the facts and circumstances of the arrest. This report will become a critical part of the prosecution’s case. In cases where there was a DUI collision, the investigating officers will also prepare an accident report describing the events that led to the collision. This report can also be critically important in DUI cases.

What is the Accident Report?

Whenever a collision occurs and the police are summoned to respond, there are often several different officers involved. When one or more drivers involved in a collision is suspected of driving under the influence of alcohol or drugs, one or more officers will handle the DUI investigation while other officers will be responsible for the collision analysis. Unlike many DUI arrests in which the officer actually sees the DUI suspect driving a motor vehicle, law enforcement is usually not present when a DUI collision occurs. As a result, they must evaluate the evidence and interview witnesses to determine who was driving and what actually occurred. Not only are these reports important to the criminal case, but these reports also become important in determining civil liability and settling insurance claims.

The accident investigation will be completed by an officer who has received specialized training. In serious accidents that occur on the freeway, an officer from the CHP’s Multidisciplinary Accident Investigation Team (“MAIT”) will be brought in to conduct a thorough investigation.

The accident report will try to determine who was driving, exactly what occurred that caused the collision and what was the cause of the accident. The investigating officer will take measurements, interview witnesses and examine the vehicles involved. The collision will be diagramed and a copy of the report will be provided to defense counsel as part of the DUI discovery process.

The accident report will usually not include facts about the driver’s intoxication, chemical test results or performance on the field sobriety tests. These observations will be included in the DUI reports that will also be compiled and turned over to the filing prosecutor. DUI collisions are treated very seriously by judges and prosecutors and drivers involved in collisions while under the influence will often face enhanced penalties if convicted of the underlying DUI offense.

In some cases, it may be helpful to bring in an accident reconstruction expert to challenge the conclusions made by law enforcement in the accident report. There may have been critical evidence that was overlooked or ignored that may exonerate the defendant. For example, there may be evidence that the defendant was not the driver of the vehicle at the time of the collision, and an accident reconstruction expert may be able to establish that a defendant was not in the driver’s seat at the time of a collision based on placement of injuries or seat positioning.

The accident reconstruction expert’s report may also challenge the presumption that the driver’s intoxication was the cause of the collision. This determination is often critical in cases where another party was injured or killed and the prosecution has filed gross vehicular manslaughter or even DUI murder charges against the defendant. The defense may be able to demonstrate that the accident was caused by road conditions, weather, or other vehicles that may result in reduced charges.

If you have been charged with a DUI involving a collision, it is critical that you meet with an experienced DUI lawyer immediately. Michael Kraut is a former Deputy District Attorney with over 14 years of prosecutorial experience who understands how to effectively defend clients charged with DUI collisions.