DUI on a Suspended License 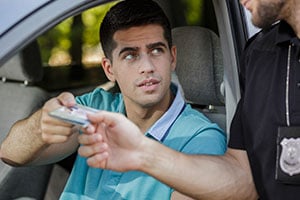 There are many facts and circumstances that can increase the penalties assessed on drivers convicted of a driving under the influence offense. Prosecutors and judges tend to look very harshly on DUI defendants who did not have a license or who were driving on a suspended license. This is especially problematic when the defendant’s license was suspended as the result of a previous DUI offense. Drivers who have been charged with DUI who had a suspended or revoked driver’s license at the time of the offense should consult with a knowledgeable DUI attorney as soon as possible.

DUI and Driving Without a License

If the defendant did not have a license or in some cases where the defendant had an out-of-state driver’s license during a DUI incident, the prosecutor may file DUI charges as well as driving without a license in violation of California Vehicle Code Section 12500 VC. Out-of-state drivers are allowed to drive in California, however the law requires California residents to obtain a California license after a short period of time. If the officer believes that the DUI driver was a California resident with an out-of-state license, the driver may also be cited for California Vehicle Code Section 12500 VC. This can result in additional penalties in Court.

If the defendant’s driver’s license was suspended as the result of a previous DUI conviction, he or she can be charged under California Vehicle Code Section 14601.2 VC in addition to a new DUI offense. The defendant can be sentenced to mandatory jail on the DUI with priors and mandatory consecutive jail time for the violation of California Vehicle Code Section 14601.2 VC. The defendant will also be required to have an Ignition Interlock Device (“IID”) installed in his or her vehicle.

If the defendant had previous multiple DUI convictions, a conviction for vehicular manslaughter while under the influence or was declared a Habitual Traffic Offender pursuant to California Vehicle Code Section 14601.3 VC, the defendant nay face an additional consecutive 180 days in jail as well as court fines.

Drivers who are convicted of driving on a suspended license can have their car impounded by the sentencing judge. There are a number of California Vehicle Code Section that allow impoundment or even seizure of vehicles whose drivers knowingly drive while their privilege is revoked or suspended. For a first-time offense, the driver’s vehicle can be impounded for a maximum of six months. The judge can order up to a year of car impoundment on a second or subsequent offense. In addition, if the defendant is a repeat offender, the judge can deem the defendant’s vehicle a “nuisance” and the vehicle can be forfeited and seized.

If you have been charged with DUI without a license or on a suspended license, it is critical that you discuss your case with a knowledgeable DUI lawyer immediately. As a former Deputy District Attorney with over 14 years of prosecutorial experience, Michael Kraut understands how to effectively fight DUI and related chargers in court and before the DMV.