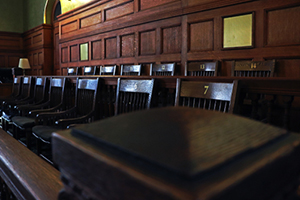 Any person charged with a felony or misdemeanor in Los Angeles has the right to a trial by jury. A jury trial is sometimes called “a jury of one’s peers,” because the jury is made up of members of the community. In California there are no professional juries, which means that each juror will not have special training about the legal system. Eligible members of the community receive summons to court on a random basis to be jurors. Then when a case proceeds to the point where a defendant requests a trial by jury, jury selection can begin.

Jury selection is referred to as Voir Dire, and is one of the most informal parts of a jury trial. The judge and the attorneys ask individuals jurors about their family and work history, about their views of law enforcement and crime, and sometimes about the type of case that is before the judge. However, no one is allowed to mention the actual facts of the upcoming case to the jurors. If a juror has a bias, or there is some other reason why a juror cannot be fair and impartial, the judge may excuse that juror. These are called strikes, “for cause,” in that there was cause to dismiss the juror. Each case is different, and some jurors may have strong views that are not well fitted to a domestic violence trial or a DUI trial.

Once the judge determines that all the remaining jurors are capable of being fair and impartial, each attorney has between six and twenty peremptory challenges, depending on the seriousness of the case. Peremptory challenges allow the attorney to dismiss a juror without stating the reason. The attorneys want to get rid of any juror that seems inclined to agree with the other side. Reasons need not be given, unless the defense raises a concern that jurors are being stuck for race, ethnicity, or sex. At that point, the prosecution will be required to give race and gender neutral reasons for having the juror sent away. Once twelve jurors are picked, they are sworn in. The court may then choose to have one or more alternate jurors selected, in case one of the twelve jurors cannot finish the trial.

While it is customary to refer to open criminal charges as a “case,” in trial there is presentation of the “People’s Case,” and then the “Defense Case.” The prosecution is referred to as The People of the State of California. The prosecution must prove the criminal charges beyond a reasonable doubt, which is proof that leaves you with an abiding conviction that the charges are true. The Defense is not required to present any evidence at all. The Defense can merely argue that the People did not prove the crime. But almost every defense case involves presenting some evidence.

Each side may make an opening statement, which is an opportunity to give an overview of the case and to try to set up how the jury should view the evidence. After opening statements, the People deliver their case. It will generally involve witnesses testifying on the stand, and can involve scientific evidence, expert testimony, pictures, videos, and objects taken from the crime scene. After each witness gives their testimony, the Defense may then cross examine the witness, which involves pointing out flaws or weaknesses in the People’s evidence.

In addition to making objections throughout the People’s case, once the People rest, or finish their case, the Defense can put on their own case. This can involve witnesses for the Defense, another expert to give a different perspective, and the presentation of additional investigation that the Defense has carried out. Once the Defense rests, the court may allow the People to put on a rebuttal case, to deal with evidence brought up by the Defense. Once all evidence has been taken, and exhibits moved into evidence, then the judge and each attorney agree on the jury instructions to be read. Jury Instructions are simply statements of the law that the jury needs to follow.

After Jury Instructions are read (or sometimes just before), each attorney may give a closing argument. This is an opportunity for the Defense to argue that a crime has not been proved, and may involve reviewing the evidence from the entire trial. After the closing arguments, the jury goes back into a secluded room to deliberate, and renders a verdict of guilty or not guilty.

Many cases do not go to trial because the prosecutor offers a plea deal that is reasonable. However, that plea deal will always be based on what the prosecution believes that they can prove at trial. And it takes a skilled attorney, will a solid reputation as a trial attorney, to convince the prosecution that their case will not stand up to scrutiny.

If you or a loved one is charged with a crime, it is critical that you consult with a Los Angeles DUI Attorney immediately. As a former Deputy District Attorney with over 14 years of prosecutorial experience, Attorney Michael Kraut is highly effective at trying cases on behalf of his clients.