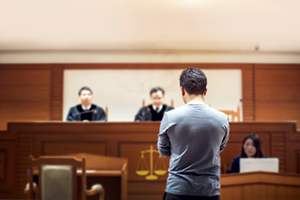 Any individual charged with a Felony or a Misdemeanor in Los Angeles has the right to a trial by jury. Sometimes called a trial by a “jury of one’s peers,” it is meant to preserve a connection to the community’s sense of justice, apart from forces other than justice, such as politics, economics, or special interests. For lesser violations, such as infractions, there is no right to a jury trial. There is only the right to a trial before a judge, which may be called a court trial or a bench trial. Individuals charged with serious crimes may waive their right to a jury trial, opting instead to have their trial before a single judge.

Benefits of a Jury Trial

When a person is accused of a crime in Los Angeles, it can be a worry that the case might be placed on a criminal court conveyor belt where everyone is pushed toward a conviction. People want their own cases to be treated as unique, with all the mitigating evidence explored. Because judges have seen so many cases, it may be hard for a judge to truly treat each case as unique, without finding patterns, and making rulings according to those patterns. Judges are also subject to elections in Los Angeles County and throughout California. This means that if a Judge wants to remain a judge, the political desires of voters cannot be totally dismissed. That means that a judge’s decisions cannot be totally unpopular.

While a jury panel may place great weight on the fact that a domestic violence victim does not want prosecution, a judge may be unimpressed by this common occurrence. While a jury panel may listen with great interest at the inner working of a law enforcement breath test device, a judge may have heard the DUI evidence so many times that it is thoroughly boring. This could lead a judge to dismiss an irregularity that a juror would fixate on. For this reason, it is generally considered in a defendant’s best interest to have a jury trial on most types of cases.

Benefits of a Court Trial

There are certain types of cases where waiving the right to a jury may be in the best interest of a person accused of a crime. There may be certain cases that have received a great deal of media coverage. While an anonymous juror may have already decided whether the accused person is guilty or innocent, a judge would have more experience at remaining impartial despite public facts. Sometimes there are cases that are extremely complex, such as document heavy white collar crimes, or environmental crimes involving extensive chemical analysis. In such a case it might be better to rely on a judge to absorb the entire technical scope of a case, rather than trying to explain it all to twelve jurors, and trying to get them all to agree.

There may also be some cases where a person is accused of a crime, and while their conduct may be shocking or controversial, it is completely, or largely, legal. This may be true in protests or civil disobedience, where the underlying cause may be important to a jury panel, whereas a judge would look at the methods employed, and their legality. Jurors may be more connected to emotional aspects of controversial cases, while a judge will have a great deal of practice looking at the legal elements of the crime, apart from whether the actions involved are socially and morally approved.

While an experienced trial attorney can usually negotiate a good resolution to a case prior to trial, a criminal attorney must always be prepared to go to trial if it is the best interest of the client. As trial approaches, the expectations of the upcoming trial heavily influence the negotiations. Having an attorney with a long and stellar trial record affects what the prosecution is willing to offer. And having an attorney who can recognize the times when a bench trial is advantageous can save a client from pitfalls inherent in trials.

If you or a loved one is charged with a crime, it is critical that you consult with a Los Angeles Attorney immediately. As a former Deputy District Attorney with over 14 years of prosecutorial experience, Attorney Michael Kraut is highly effective at trying cases on behalf of his clients.