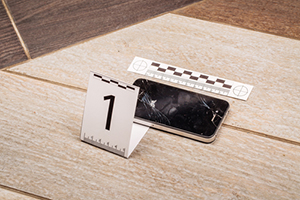 Before cell phones, every phone had a fixed location. If Los Angeles police officers knew what phone a person was using, then they knew where that person was. A person talking on the phone could expect that their conversation was private, as a warrant was required to tap a phone and listen in on conversations. But a person could not expect secrecy regarding what numbers were dialed, and when the calls were placed. That was information handled by the phone company, a third party. And because the phone company had that information, police officers were able to get that information without a search warrant.

With the introduction of cell phones, more and more information passed through the hands of the phone company. Phone lines were transformed into vast cell networks transmitting information from every category of life. One of the most interesting pieces of information, for law enforcement, was location data. A phone in the pocket drew a line on a map showing where a person was every minute of the day. If the phone was at a crime scene, the phone’s owner was almost certainly there. Police investigations in Los Angeles began to rely heavily on the warrantless collection of cell phone location data. Law enforcement agencies thought that they were within the bounds of the “Third Party Doctrine” when requesting cell site location information.

The reconsideration of cell phone privacy rules came (ironically enough, as recognized by the Court) from a series of robberies of cell phone stores. Three of the four robbers were caught. Police officers suspected that Timothy Carpenter was the fourth robber, and they requested his cell site location information, which would allow officers to not only see where Carpenter was in real time, but to track his movement for up to five years. The police looked at over fourth months of location data for Carpenter, and catalogued about one hundred locations a day for him. The location data was then used to convict him of the robberies.

The United States Supreme Court held that the historical location information available through cell phone data was protected by a reasonable expectation of privacy. That meant that law enforcement must obtain a search warrant supported by probable cause if they wished to track a person’s location using cell site location information. Even though this information is sent to a third party, the phone company, that aggregates and stores the data, the Court emphasized that the process of a cell phone checking in with a tower is much more automated than even placing a phone call or depositing a check (phone and bank records are one of the most common forms of data sought under the third party doctrine).

The United States Supreme Court emphasized the limited nature of their holding in Carpenter v. US. (2018) They noted that they were requiring a warrant for cell site location information, but that they were not addressing all the other types of data that still pass through cell phones. Location data is very passive, in that the phone automatically checks in with cell towers. However, other types of data are more intentional, such as when people mark their location on social media, or even simply post online while the site’s location tracking is on.

Due to the fact that there are still may ways that cell phone data can be used to help police officers track a person’s activity, it is important that individuals accused of a crime make sure that their data is protected. Evidence collected in violation of the Fourth Amendment can be kept out of court by a suppression motion. The way that cell phones change the way data is used in society is constantly interacting with constitutional law in new ways. It takes an attorney that is always on the cutting edge of Fourth Amendment law to push back on the erosion of privacy rights.

If you are facing criminal charges, it is important that you consult with a Los Angeles Criminal Defense Lawyer immediately. Los Angeles Criminal Defense Attorney Michael Kraut is a former Deputy District Attorney with over 14 years of prosecutorial experience who knows how to effectively litigate search and seizure issues on behalf of his clients.