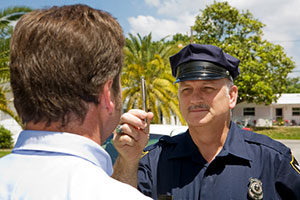 A Los Angeles driving under the influence investigation typically starts after a driver is pulled over by the police following an observed violation of a traffic law. The officer will approach the driver and will engage him or her in conversation. The initial observations made by the officer will often trigger a full DUI investigation if the officer suspects that the driver may be under the influence of alcohol or drugs.

The typical DUI arrest report will contain information regarding the officer’s initial contact with the DUI suspect and will describe the factors that led the officer to believe the driver was under the influence. An effective Los Angeles DUI Attorney may be able to challenge these observations in court.

In addition, the odor of alcohol can vary significantly depending on what type of alcoholic beverage was consumed and the physiology of the person consuming it. People who have been drinking beer tend to have the strongest odor of alcohol when compared to other types of alcohol, despite the fact that beer has one of the lowest alcoholic content. In contrast, certain hard liquors such as vodka will have little or no odor after being consumed, even with large quantities. This can be used to show a prosecutor, judge or jury that odor of alcohol is not a true indication of one’s level of impairment.

In many cases, officers will cite a driver’s slurred speech as a basis for expanding the DUI investigation in arrest reports. It is often the case that a driver’s speech is described as being “slurred,” “thick” or even “unintelligible.” This observation often carries a great deal of weight with prosecutors, judges and juries who may believe that the driver must have been extremely intoxicated if he or she was unable to speak properly.

In many cases, what an officer observes as slurred or unintelligible speech may be the defendant’s normal speech pattern. In addition, the driver may be tired, ill or suffer from some condition that affects how he or she is heard and understood. In many cases, people who have been pulled over become very nervous which can cause them to stutter or come off as unintelligible.

Officers also will describe a lack of coordination as evidence of a driver’s level of impairment. These observations can lead an officer to believe that a driver is too intoxicated to drive and can create a basis for arrest. However, there may be many reasonable explanations for a suspect’s lack of coordination. In many cases, a person who has been pulled over and questioned by police may have been sitting behind the wheel for hours or more. It is only natural for some people who have been sitting for such a long period of time to stumble when asked to stand up and perform a series of field sobriety tests.

A person may also stumble when exiting a vehicle due to his or her choice of footwear or an uneven road surface. Additionally, nervousness or being upset at being pulled over can cause the suspect to appear unsteady when asked to stand up. The driver’s adrenalin level can cause him or her to shake uncontrollably or appear unsteady.

If you have been charged with driving under the influence, it is absolutely crucial that you meet with a Los Angeles DUI Lawyer as soon as possible. Attorney Michael Kraut is a former Deputy District Attorney who knows how to effectively challenge officer’s on their observations. Mr. Kraut works tirelessly to ensure his clients’ receive the most thorough representation possible.