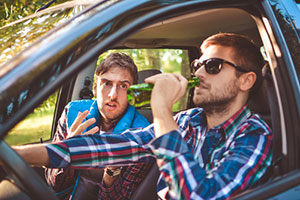 A common question that often comes up is whether or not a passenger in a vehicle can be charged with a DUI offense. In California, the DUI laws only penalize those who are actually driving while under the influence of alcohol. However, there may be circumstances where a passenger in a vehicle may be implicated in a DUI crime or another criminal offense.

Is There A Doubt About the Driver’s Identity?

Under California law, an intoxicated passenger in a vehicle cannot be charged with a DUI offense. However, there may be circumstances where the investigating officer has reason to question which party was actually driving a vehicle in a DUI offense. This may occur after a DUI collision where the driver and passenger switch spots in order to avoid a DUI, or where the driver is trying to avoid an under 21 violation or probation violation.

In Los Angeles, for example, the investigating officer will take witness statements and will look at evidence such as the placement of injuries and the positioning of the car seats. Ultimately, the officer may conclude that the “passenger” was actually the driver and that person may be arrested for DUI.

The officer may also examine dash cam video recordings to see if the driver and passenger switched positions at any time. These recordings may be used as evidence that a passenger was, in fact, a DUI driver.

There are rare instances where an intoxicated passenger of a vehicle has grabbed the wheel of a vehicle that is being driven. California courts have found that DUI charges are appropriate in this situation and that the passenger was, in fact, a “driver” as defined by the law.

Passenger’s Role in A DUI Investigation

There may be cases where a passenger’s presence complicates a DUI investigation. The officer may claim to smell an odor of alcohol coming from the driver or an odor of marijuana in the vehicle, however this smell may be attributed to another person in the vehicle. The defense may be able to show that there was insufficient reasonable or probable cause to arrest a driver based on these faulty observations.

Vehicle Passengers May Be Arrested For Other Criminal Offenses

A DUI investigation may open the door to other criminal charges that could implicate a passenger of a vehicle. The officer may see an open container of alcohol, observe drugs or smell marijuana and search the vehicle. If there is sufficient reasonable or probable cause to believe that a vehicle’s passenger has committed a crime, the passenger may be arrested for an offense other than DUI.

If you or someone who know have been arrested for or charged with a DUI offense, it is crucial that you discuss your case with a knowledgeable Los Angeles DUI lawyer as soon as possible. As a former Deputy District Attorney with over 14 years of prosecutorial experience, Michael Kraut recognizes the unique set of circumstances involved in each DUI offense and works hard to ensure that every avenue of defense is fully explored.