Difference Between DUI and a Traffic Ticket 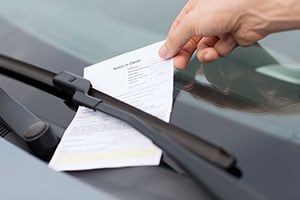 Many drivers who are arrested for DUI have no previous experience in dealing with the criminal justice system besides traffic tickets. These drivers may believe that a DUI will be treated similarly to a traffic ticket, however this is not the case. Even though the driver is typically provided a citation with a future court date that looks identical to citations issued for minor traffic offenses, DUI offenses are misdemeanor (or sometimes felony) level offenses and are treated much more seriously.

Traffic citations for offenses such as speeding, running red lights or using a cell phone while driving are infractions. These offenses are not punishable by jail or probation, but instead are punishable by a fine. Under the DMV point system, the DMV will typically assess a “point” for an infraction. For certain offenses, the DMV may issue a driver’s license suspension or revocation.

Driving under the influence is a criminal offense and is typically charged as a misdemeanor. Defendants who are convicted can be sentenced to serve up to 90 days in jail on a first time offense and up to a year in jail on a second or subsequent offense. A defendant’s fourth or subsequent DUI offense can be charged as a felony and he or she can be sentenced to serve up to three years in prison if convicted.

If convicted of a DUI, the defendant will usually be placed on probation for a period of time between three and five years and will have to complete an alcohol education program in addition to whatever terms and conditions of probation the court imposes. The conviction will also result in a license suspension from the DMV. In addition, a conviction will be entered on the defendant’s criminal record and would be visible to employers, landlords or anyone else conducting a background search.

DUI cases are prosecuted by a deputy city attorney or deputy district attorney who would be responsible for handling the case. The officer’s non-appearance at trial may not result in dismissal of charges and the prosecutor may make further efforts to ensure that the office appears in court. There are typically numerous pretrial hearings where the prosecution and defense exchange discovery evidence and work on potentially resolving the case.

Unlike ticket trials in which the case is only heard by a judge or commissioner, a DUI case can be set for trial in front of either a judge or a jury. The defendant can choose a jury trial in which 12 members of the public would hear the evidence and arguments and ultimately decide whether or not to find the defendant “guilty” or “not guilty.” The jury must reach a unanimous verdict.

If you have been charged with DUI and have more questions about this process, it is crucial that you discuss your case with a top-rated DUI lawyer immediately. Michael Kraut is a former Deputy District Attorney with over 14 years of prosecutorial experience who understands that the process can be confusing for those who have little or no experience with the criminal justice system and works hard to ensure his clients receive the best representation possible.