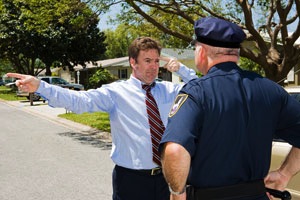 Someone accused of Glendale DUI with Injury is treated more severely than those accused of standard DUI under California law. Pursuant to California Vehicle Code Section 23153 (a) and (b), DUI with Injury in Glendale is considered a “wobbler,” meaning that a prosecutor can file either felony or misdemeanor charges. Glendale DUI Penalties are typically harsher in cases in which there is an injured party. Most people do not know that even a very minor injury may result in being arrested for a felony.

The court process for a Glendale DUI with Injury is similar to the typical Glendale DUI Process, with some significant differences. For example, a person charged with Glendale DUI with Injury is more likely have conditions of release while their case is pending, such as attendance of Alcohol Anonymous meetings or wearing an alcohol monitoring bracelet to guarantee their continued sobriety. However, even if a person has made bail on this type of case, if the prosecutor files additional charges then the person may be remanded back into jail with a higher bail.

While punishment for Glendale DUI with Injury may be severe, there are viable defenses to the charge. Simply driving under the influence and being involved in a collision in which someone is injured is not sufficient to satisfy the Glendale DUI with Injury criteria. The People must be able to prove beyond a reasonable doubt that the defendant was not only under the influence of drugs or alcohol at the time of a traffic accident, but that driver also committed a traffic violation or was civilly negligent and that action caused the collision and injury.

Factors such as the severity of injury and the number of people hurt can impact the penalty of a DUI with Injury. A Driving Under the Influence Causing an Injury defendant should expect an additional year in custody for each injured victim if the case is charged as a misdemeanor. If the injuries suffered are deemed to be serious, the People may amend the charge to DUI with Great Bodily Injury.

The Great Bodily Injury enhancement adds an extra three years to any prison sentence, if convicted. If the injured victim is in a coma, the driver may face an additional five years in prison. Someone convicted of Glendale DUI with Injury may face a sentence of eight years in prison for a “serious” injury. If their victim eventually succumbs to their injuries and dies, DUI Manslaughter or even DUI Murder can be charged.

Due to the harsh punishments for these type of cases, it is important that you have an experienced and knowledgeable criminal defense attorney fighting on your behalf as soon as possible. Glendale DUI Defense Attorney Michael Kraut has been successful in getting Glendale DUI with Injury cases significantly reduced and even dismissed. As a former deputy district attorney with over 14 years of prosecutorial experience, Mr. Kraut is held in high regard by prosecutors, law enforcement professionals and judges as a fierce defender of his clients.