Glendale DUI Charges – Under The Age Of 21 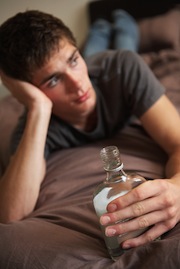 It is not uncommon in Glendale for defendants under the age of 21 who are charged with DUI offenses to face more severe sanctions than older people who can drink legally. This is due to the fact that DUI defendants under 21 are violating laws that prevent those under 21 from drinking alcohol as well laws that prohibit impaired driving. A “zero tolerance” policy is enforced in California in relation to underage DUI offenses. Pursuant to California Vehicle Code Section 23136 VC, a driver under the age of 21 who is discovered to be driving with any measurable BAC, which is a BAC of 0.01 percent or higher, would be subject to a yearlong driver’s license suspension or a year delay in being able to obtain a driver’s license for those who do not yet have their license.

As opposed to other California statutes pertaining to DUI offenses, an underage driver in Glendale does not need to demonstrate poor driving conduct in order to violate California Vehicle Code Section 23136 VC. The statute is only concerned with whether or not the underage driver’s BAC was 0.01 percent or higher. Because of this, use of products containing alcohol, like over-the-counter cough medicines or mouthwash, can cause an underage driver to have a detectable BAC and thus could trigger a license suspension. Unlike most drivers who are 21 and older and who have the option of testing on a Glendale PAS device, the PAS test is required for underage drivers who are stopped by law enforcement on suspicion of DUI.

California Vehicle Code Section 23136 VC is considered a civil and administrative penalty assessed by the California Department of Motor Vehicles. To contest the license suspension, the driver must request a hearing with the DMV or else the suspension will automatically go into effect. In Glendale, a hearing officer from the Van Nuys Driver’s Safety Office of the Department of Motor Vehicles will usually be assigned. There is only a small window in which a driver can submit the necessary paperwork to contest the suspension, and failure to meet the deadline would result in a yearlong license suspension.

In addition to any license suspension, drivers in Glendale who are under 21 can also face court penalties if their BAC was between 0.05 and 0.07 percent. While this BAC may not be high enough for criminal charges of DUI under California Vehicle Code Section 23152(b) VC, driving with a BAC between 0.05 and 0.07 percent is an infraction under California Vehicle Code Section 23140 VC for drivers under 21. Underage drivers accused of this would have to appear before a judge at the Glendale Courthouse to address the infraction and could face significant court fines. In addition, these drivers would lose their driving privileges for a year.

If the underage driver is discovered to have a BAC of 0.08 or higher, he or she could be charged with a Glendale DUI offense in violation of California Vehicle Code Section 23152(a) VC as well as Glendale driving with a blood alcohol content of 0.08 or higher in violation of California Vehicle Code Section 23152(b) VC. Those convicted of a first DUI offense can be sentenced to up to a year in jail, between three and five years of probation, extensive fines, and mandatory alcohol counseling classes. DUI defendants under 21 often face increased penalties based on the fact that they are not legally allowed to drink in the first place. Judges may impose additional or increased punishments, including community labor, completion of the county hospital and morgue (“HAM”) program and mandatory AA sessions. These underage defendants would still lose their license for a year in addition to any court penalties.

If you or a loved one have been arrested for an under 21 DUI offense, it is crucial that you speak with an established Glendale DUI attorney right away. There are important DMV deadlines that must be met in order to contest a DMV suspension, and an attorney can make sure the necessary requests are submitted. Glendale DUI Lawyer Michael Kraut is a former Deputy District Attorney with over 14 years of prosecutorial experience who has had tremendous success in defending underage DUI clients. Mr. Kraut has an established reputation in Glendale as a skilled DUI attorney who is highly respected by judges, prosecutors and law enforcement alike.