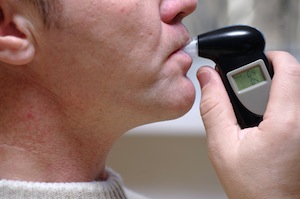 Many people facing DUI charges in Glendale may also be facing the additional allegation that they committed a Glendale DUI Refusal. The law of what constitutes a DUI Refusal in Glendale may seem straightforward, but in reality can be complicated.

Law enforcement officers may have a suspicion that a particular driver may be drunk, but cannot be sure without obtaining a breath or blood sample. As such, those suspected of DUI in Glendale are asked to submit to chemical testing.

During a Glendale DUI investigation, the suspected DUI driver is usually asked to provide a breath sample on a Preliminary Alcohol Screening ("PAS") device by the police officer.

As part of the DUI arrest process, the suspect driver will be provided the option of giving a blood or breath sample. Drivers will always be asked to provide these samples. Refusal to take a DUI Chemical Test may carry varied consequences depending on the circumstances. As a result, Glendale DUI Refusals involve an area of DUI law that may be confusing to the general public.

In California, it is illegal for drivers to refuse chemical testing under the following circumstances:

Sometime the lines of what does or does not qualify as a Glendale DUI Refusal can seem blurry. A Glendale DUI Refusal can be as straightforward as a driver saying "No," when requested by law enforcement to submit to a breath or blood sample after a Glendale DUI arrest. In some situations, a DUI suspect will be deemed to have refused testing when they agree to a test but then do things to delay or undermine the test, such as pretending to blow or asking numerous questions to cause a delay.

For an allegation of Glendale DUI Refusal to be sustained, a law enforcement officer must admonish the DUI suspect regarding the consequences of refusing the chemical test, specifically that they can being charged with DUI pursuant to California Vehicle Code Section 23152(a) and that there would be additional penalties, including loss of license, for the Glendale DUI Refusal. Failure to give this admonishment may void a Glendale DUI Refusal allegation. A DUI suspect must be conscious and cognizant during the reading of the admonishment. If they are not, the refusal may again be invalid.

Other legal issues may exist that undermine the legitimacy of a Glendale DUI Refusal. If any delay in testing is caused by the law enforcement agency, and not the DUI suspect, this would not constitute a Glendale DUI Refusal. Additionally, people may have medical issues or conditions that affect their ability to provide a blood or breath sample, which could affect a Refusal allegation. If these issues are present, a knowledgeable Glendale DUI defense attorney can make sure they are fully explored and litigated.

The U.S. Supreme Court has recently held that police officers are not allowed to forcibly extract a blood sample from a DUI suspect without a warrant. The decision in Missouri v. McNeely overruled previous California law which allowed forcible blood draws. However, although the chemical test results may be suppressed, the Glendale DUI Refusal allegation and subsequent VC 23152(a) DUI charge would still be valid.

A Glendale DUI Refusal allegation carries more severe penalties in court. If convicted of the underlying DUI charge, the Glendale DUI Refusal allegation requires additional jail time. A first time DUI offender can be sentenced to 48 hours in jail. For people with a prior DUI, they would face a minimum of 96 hours in custody. Third time offenders with a Refusal will be subject to at least 10 days in jail, consecutive to any other jail sentence on the DUI.

The California Department of Vehicles assesses a much more harsh suspensions for Glendale DUI Refusals. First time offenders who refuse testing face a one year license suspension with no ability to get a restricted license. Drivers with prior DUI suspensions on their driving record will have an additional year for a Refusal added to any underlying licenses suspension.