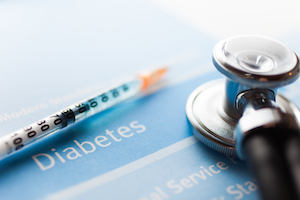 Drivers who suffer from certain medical conditions may exhibit symptoms that often lead law enforcement officers to suspect that the individual is driving under the influence of alcohol or drugs. Diabetes is one such condition that, in certain cases, may have symptoms similar to alcohol intoxication, may cause a person’s breath to smell like alcohol and may even cause a person to have elevated BAC results on a DUI breath test.

People with Diabetes Can Result in High BAC

Breath test devices can be affected by the presence of “ketones” on a person’s breath. Ketones are produced by the liver when the body breaks down fat for energy. The ketones produced are excreted in a number of ways, including on a person’s breath. Breath test devices often read ketones as alcohol due to its similar molecular structure. People who suffer from diabetes are prone to ketosis which can result in abnormally high BAC readings.

Diabetes is a condition that occurs when a person produces little or no insulin or does not product enough insulin to resist the effect of insulin, which delivers glucose throughout the body. When a person does not have enough insulin, the body will burn fat which then produces ketones. If the body produces too many ketones, the person can suffer from diabetic ketoacidosis which can lead to a coma or even death.

The physical symptoms associated with diabetic ketoacidosis often can be confused with the physical symptoms of alcohol or drug intoxication. These include a dry mouth/increased thirst, a frequent urge to urinate, a sluggish demeanor, confusion, limited coordination, having a flushed face, nausea, and having a sweet breath odor that can be confused with alcohol consumption.

In a typical DUI case, the arresting officer often describes an odor of alcohol coming from a driver, flushed face, sluggishness and confusion as signs that the driver may be under the influence. The officer will then ask the driver to participate in a series of field sobriety tests that are designed to measure a driver’s coordination and balance. If a diabetic driver is suffering from diabetic ketoacidosis, he or she may perform poorly on the field sobriety tests and may appear and smell similar to a driver who is intoxicated.

In addition, the presence of ketones on a driver’s breath may produce elevated BAC readings on a breath testing device. Ketones have a similar molecular composition as isopropyl alcohol, which is the alcohol typically found in industrial solvents such as acetone. Ketones do not have a similar composition as ethyl alcohol, which is alcohol that is consumed. In many cases, Breathalyzer machines are unable to distinguish ketones from ethyl alcohol. This means that a diabetic person may have increased ketones in his or her breath sample which will result in a higher BAC reading. The driver may have consumed some alcohol but were under the 0.08 percent legal limit. However, if the driver’s breath test is elevated due to the presence of ketones, the breath test result may incorrectly show a BAC in excess of 0.08 percent. In these cases, the defense may need to call a medical expert or other expert witness to show how diabetes and the presence of ketones may have affected the defendant’s demeanor and led to an inaccurate BAC test results.

If you have been arrested for DUI, it is crucial that you speak with a Los Angeles DUI Attorney as soon as possible. As a former Deputy District Attorney with over 14 years of prosecutorial experience, Lawyer Michael Kraut understands the physiological defenses that may apply in DUI cases and works hard to ensure that his clients receive the most comprehensive defense possible.