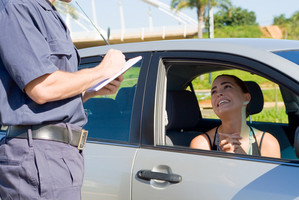 In order to prove that a defendant is guilty of driving without a license, a prosecutor must be able to prove following elements:

The term highway refers to any area that is publicly maintained and open to the public for the purposes of vehicular travel, including streets. A motor vehicle would include a passenger vehicle, motorcycle, motor scooter, bus, school bus, commercial vehicle, truck tractor and trailer.

A man has a valid license but forgets to renew it. The license expires and he continues to drive despite the expiration. The man is stopped by the police on an unrelated traffic offense. He could be charged with driving without a license pursuant to California Vehicle Code Section 12500 VC.

In another example, a man who splits his time between New York and California is stopped while driving in California for work. Although he has an apartment in California, his primary residence is in New York and he has a valid New York license. This man would not be guilty of driving without a license because he would be excused from the requirement of having a California license.

4. Defenses to Driving without a License

As described above, if the defendant was excused from the requirement of having a valid California driver’s license, he or she would not be criminally liable for this offense. This would include out-of-state drivers visiting California, those who maintain primary residences out-of-state, or those who moved to California within the previous 20 days.

For defendants who do have valid licenses, but simply do not have their licenses with them at the time they were stopped, they could be charged with failing to present a driver’s license under California Vehicle Code Section 12951 VC, which is an infraction.

Driving without a license is a “wobbler” offense that can be charged as either a misdemeanor or an infraction. If charged as a misdemeanor, the maximum penalty is six months in jail and a $1,000 court fine. If charged as an infraction, the maximum penalty is a $250 court fine. In many cases, prosecutors are willing to reduce a California Vehicle Code Section 12500 VC charge to an infraction or even dismiss the case if the defendant is able to obtain a valid California driver’s license while charges are pending.

6. Criminal Defense for Driving without a License

Driving without a license under California Vehicle Code Section 12500 VC is a criminal offense that can result in a conviction on someone’s record if not handled properly. As a result, it is advisable to consult with a Los Angeles Criminal Defense Attorney if you have been charged with driving without a license. Los Angeles Criminal Defense Lawyer Michael Kraut is a former Deputy District Attorney with over 14 years of prosecutorial experience who is highly adept at handling cases involving driver’s license violations. Mr. Kraut works hard to ensure the best possible outcome for his clients.