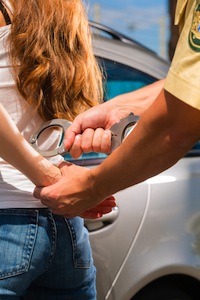 Many of the drivers charged with DUI in Beverly also face the additional allegation that they committed Beverly Hills DUI Refusal. The allegation that someone refused to submit to chemical testing may seem straightforward, but often can be complicated and open to interpretation.

A law enforcement officer requires a breath or blood sample from a suspect in order to show that the driver was under the influence. Instead of trying to get a warrant for testing for every DUI arrest, Beverly Hills DUI suspects are asked to "voluntarily' provide a breath or sample. If they refuse, they may still be charged with a DUI in addition to a Beverly Hills DUI Refusal allegation.

Beverly Hills DUI suspects may be asked to submit to various forms of chemical testing during different stages of the Beverly Hills DUI Process. Usually, when someone is stopped they will be asked to breathe into a Preliminary Alcohol Screening ("PAS") device by a law enforcement officer. If that person is arrested for DUI, he or she will be asked to submit to chemical testing via a breath or blood sample.

Those arrested for DUI will always be asked to provide a blood or breath sample (except in rare circumstance when consent would be impossible, such as when the suspect is unconscious). If the driver refuses, there are a variety of consequences depending on the circumstances and what test was refused.

In California, it is illegal for driver to refuse chemical testing in the following scenarios:

If a driver verbally agrees to submit to chemical testing but then attempts to delay or avoid testing by pretending to blow into the device or asking numerous questions, law enforcement may consider these tactics to constitute a Beverly Hills DUI Refusal.

Before someone can be deemed to have refused testing, he or she must have first been admonished regarding the consequences of the Beverly Hills DUI Refusal, namely that that refusing to submit would result in a charge of DUI under California Vehicle Code Section 23152(a) , and separate penalties for the refusal allegation and enhanced driver license penalties would apply. If this admonishment was not provided, the Beverly Hills Refusal allegation cannot be sustained. The person must be admonished that a Beverly Hills DUI refusal will result in a license suspension by the DMV and enhanced penalties, including mandatory jail time, in the criminal court.

Recently, the U.S. Supreme Court has overturned previous California by ruling that law enforcement officers are no longer able to forcibly extract blood from DUI suspects without a warrant. This holding in Missouri v. McNeely now prevents law enforcement from conducting these warrantless blood draws in most situations. However, although blood evidence obtained via a warrantless draw may be suppressed, someone in this situation may still have to face the Beverly Hills DUI Refusal allegation (and corresponding VC 23152(a) DUI charge).

A Beverly Hills DUI Refusal allegation will trigger enhanced Criminal Court penalties in addition to those normally assessed in the DUI case. First time offenders would face mandatory jail time. For someone with a prior DUI, the jail time would significantly increase. For third time DUIs, the Beverly Hills Refusal allegation would result in a minimum of 130 days in jail.

The California Department of Vehicles assesses increased penalties for Beverly Hills DUI Refusal. First time offenders who are determined to have refused testing will receive a yearlong suspension with no opportunity to get a restricted license. Drivers with prior DUI related suspensions would face a year suspension on top of whatever the license suspension period would normally be.