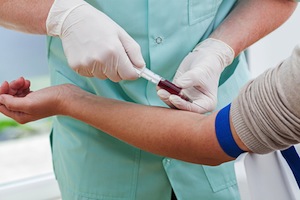 One of the critical stages of the Beverly Hills DUI Process involves the use of a breath or blood test to determine if the driver’s blood alcohol content is above the legal limit of 0.08 percent. Suspects have a choice of test, and many choose the breath test, as it is easier to perform and does not involve needles. The blood test is generally considered to be more accurate and can also be used to determine if a Beverly Hills DUI suspect is under the influence of drugs. However there may be issues with the blood test that can ultimately undermine the reliability of the results and its evidentiary value.

Title 17 of the California Code of Regulations controls how a law enforcement agency can obtain, store and analyze blood samples associated with DUI cases. Some of these requirements include the following:

When a blood sample is taken from a DUI suspect, a portion of this sample can be set aside, stored and made available for future testing. This is different from the breath sample, which disappears immediately and can never be retested. Before a law enforcement officer in Beverly Hills proceeds with blood testing, that officer must inform the DUI suspect that the blood sample can be saved if so requested.

At a later date, the DUI defendant can request that this portion of the sample be released by having the judge handling the case sign a "blood split order." Once this order has been signed, the sample can be released to an independent laboratory for retesting. In some cases, the independent testing can reveal errors in how the first sample was tested or contamination that may have compromised the sample.

There are a number of factors that can affect the accuracy of blood testing in Beverly Hills. Law enforcement handle thousands of blood samples at any given time. If any of the blood samples commingle or are subject to cross-contamination, the results of all subsequent testing would be highly suspect. Additionally, even if blood samples are not contaminated by external forces, the alcohol content of the blood sample can change if not stored in the correct manner and at proper temperatures. Improper storage of blood samples can lead to a process called hemolysis in which the cell walls of red blood cells break down and ferment. When this material ferments, it actually increases the alcohol level in the blood sample, which leads to inaccurately high BAC results.

When testing for the presence of drugs/drug intoxication, there also may be inherent problems with the blood test. The test may be able to determine whether a certain substance was present in a person's blood, however it cannot always tell whether that substance would have had any intoxicating effects on that person. With many drugs, such as marijuana, the substance can stay in a person's system for days and even weeks after the intoxicating effect of the narcotic has subsided. When a defendant is facing allegations of driving under the influence of drugs in Beverly Hills based on the results of the blood test, his or her attorney may use experts to show that the levels of narcotic found in the blood were so low that they had no intoxicating effect.

Another noteworthy distinction between blood and breath testing in Beverly Hills is that a blood sample can be physically taken from a suspect against his or will, while a breath sample cannot. Previously, forced blood draws were fairly common and were used to obtain blood samples from non-consenting DUI suspects. However, the United States Supreme Court has ruled in the Missouri v. McNeely case that blood cannot be drawn from a suspect without consent or without a warrant. Even with these changes in law, it is important to remember that those who refuse to submit to chemical testing can still be prosecuted for DUI.