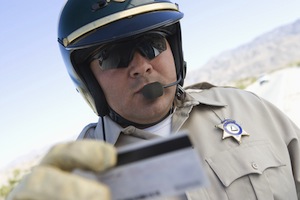 The Beverly Hills DUI Process can often be intimidating for the uninitiated. Drivers arrested for Driving Under the Influence in the Beverly Hills area may find themselves overwhelmed with the amount of information thrown at them at once at a time that is already very stressful. One of the most important actions that transpires occurs when the officer conducting the arrest takes away the arrestee’s driver’s license and notifies him or her of a driver’s license suspension by police slated to begin in 30 days. The arresting officer may be from the Beverly Hills Police Department, the Los Angeles County Sheriff’s Department, the California Highway Patrol or any other law enforcement agency actively patrolling the Beverly Hills area.

Any driver found operating a motor vehicle with a blood alcohol content of 0.08 percent or higher faces an automatic suspension by the California Department of Motor Vehicles. This suspension will be imposed unless the driver or the driver’s lawyer requests an administrative hearing to challenge the suspension. A driver arrested for a DUI offense will be asked to submit to either a breath or blood test to determine whether or not they have a BAC over the legal limit. If the driver opted to take a blood test, the results would not be known right away but the suspension would go into effect anyways. If the driver refuses testing he or she would lose their license for a year.

At the time of the arrest, the arresting officer would serve notice of the license suspension. This notice would function as a temporary license that the arrestee can use to drive with during the 30 days before the suspension begins.

The DMV’s license suspension in Beverly Hills is considered an administrative action controlled by the DMV and DUI Suspension Code. The duration of the suspension and the availability of a restricted license depends on a number of factors, including the following:

A person arrested for a Beverly Hills DUI offense who has no priors, who agreed to provide a breath or blood sample and who is 21 or older would face a four month license suspension. After a 30 day hard suspension, the driver would be eligible for a restricted license that would permit them to drive to and from work and to an alcohol education class. To obtain this restricted license, the driver must have an SR-22 supplemental insurance policy in effect, must have signed up for the alcohol education class and must have paid a reinstatement fee to the DMV.

For Beverly Hills drivers who refused chemical testing, who were under 21 when they were arrested or who had prior DUI convictions or suspensions, the license suspension would last for at least a year. For most of these drivers, a restricted license would not be available. For drivers who have a prior DUI conviction or suspension and are not on probation for that offense may be able to qualify for a restricted license after a 90 day hard suspension if there has been a conviction in the criminal case. To qualify, the driver would have to get an Ignition Interlock Device (“IID”) installed in his or her vehicle. This device requires the driver to blow into a tube connected to dashboard to ensure that he or she has not consumed any alcohol.

If you have recently been arrested for DUI in the Beverly Hills area, it is very important that you meet with a Beverly Hills DUI Defense Attorney as soon as possible. Certain DMV deadlines must be met in order to fight the license suspension, and a qualified attorney can ensure that all requests are properly and timely filed. As a former Deputy District Attorney with over 14 years of prosecutorial experience, Beverly Hills DUI Lawyer Michael Kraut knows how to effectively defend his clients in all aspects of the DUI process, including the administrative license suspension.

For more information about the Beverly Hills driver’s license suspension by police, and to schedule your free consultation, contact Beverly Hills DUI Lawyer Michael Kraut at the Kraut Law Group located at 8484 Wilshire Boulevard, Suite 660B, Beverly Hills, CA 90211-3220. Mr. Kraut can be reached 24/7 at 310-550-6935.