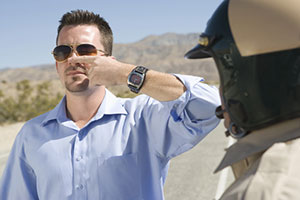 When conducting field sobriety tests, a law enforcement officer in Beverly Hills will be examining a driver to see if they show physical signs of intoxication, such as poor balance, motor skills or coordination. While many tests may be used, none of the tests alone can conclusively prove that a driver is impaired.

Standardized field sobriety tests in Beverly Hills include the following:


While law enforcement agencies in Beverly Hills may use a variety of different field sobriety tests, only the horizontal gaze nystagmus, the one leg stand and the walk and turn test are officially recognized by the National Highway Traffic Safety Administration (“NHTSA”) as being qualified and approved field sobriety tests. The NHTSA has additionally cautioned law enforcement agencies not to pass or fail a driver when administering tests, but to make objective observations of the driver’s performance on these tests and record them. If an officer appears too conclusive in their evaluation of field sobriety testing, this may show bias in the officer and could threaten the admissibility of the test. In fact, many officers may be biased when they administer field sobriety tests because they suspect the driver is already impaired.