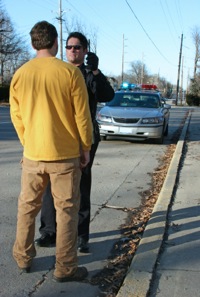 When investigating a driver for driving under the influence, law enforcement officers will be looking for various physical clues that the driver may be under the influence of drugs or alcohol. When first communicating with the driver after a traffic stop, the investigating officer will often note indicia of intoxication such as bloodshot and watery eyes, slurred speech or an odor of alcohol coming from the driver. The officer may ask the driver to participate in a series of field sobriety tests designed to show whether a driver is impaired. One of the most frequently used field sobriety tests is the horizontal gaze nystagmus test (“HGN”) in which the officer will be looking for certain involuntary eye movements that occur when a person has been drinking or using certain drugs.

The HGN test is one of three field sobriety tests that are approved by the National Highway Traffic Safety Administration (“NHTSA”) as providing an accurate indication of driver impairment. The other two tests endorsed by the NHTSA are the walk and turn test and the one leg stand test. NHTSA studies have shown that the HGN test has a 77 percent accuracy rate in detecting blood alcohol concentrations of .10 percent or higher. The HGN test is often considered the most accurate field sobriety test, however there are often issues with how the test is conducted that can later be challenged in court.

Horizontal gaze nystagmus can occur as the result of different factors or conditions, including alcohol consumption or the use of drugs that depress the central nervous system. These drugs include inhalants and phencyclidine, also known as PCP. As a person consumes more alcohol or drugs, he or she will exhibit more clearly pronounced nystagmus when tested.

In conducting the HGN test, the investigating officer will place a stationery object, typically a pen or the officer’s finger, a foot away from the driver’s face. The officer will slowly move the object to left and to the right and will observe the driver’s eyes for signs of nystagmus. Specifically, the officer will attempt to determine the angle at which involuntary eye movements begin to occur.

The officer conducting the HGN test will look for three clues for each eye. The officer will see if there is smooth movement of the eye during the test or if the eye jerks noticeably, whether the eye jerks when the test subject has moved his or her eyes as far to the side as possible, and whether the involuntary eye movements begin before the eye has moves past a 45 degree angle. Nystagmus may be caused be factors other than alcohol consumption. For example, certain seizure medication and other non-intoxicating drugs have been shown to cause nystagmus. Where there is a large disparity between the nystagmus observed in a driver’s left and right eye, this may be an indication of a medical condition and not alcohol impairment. In these cases, it may be necessary to have the driver evaluated by an ophthalmologist or have an expert witness testify on behalf of the driver if he or she is charged with a DUI offense.

Officers are trained in how to conduct the HGN test, but generally have not received medical training. The test relies on the officer’s observations of extremely precise angles and eye movements and there is a lot of room for error. These tests are usually conducted at the scene of a traffic stop and factors such as lighting can affect an officer’s perception and ability to properly perform the HGN test.

If you have been charged with a DUI offense, it is crucial that you meet with a Los Angeles DUI Attorney immediately. As a former Deputy District Attorney with over 14 years of prosecutorial experience, Lawyer Michael Kraut knows how to effectively cross-examine officers on the HGN test and other field sobriety tests.