How can the Police Prove Impairment in DUI Marijuana Cases? 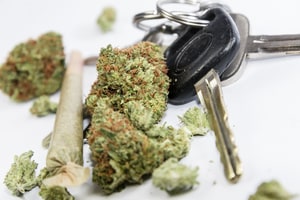 Many of legal restrictions regarding marijuana use and possession have been relaxed in California and as a result there has been an increase in the number of DUI cases involving marijuana use. Under California Vehicle Code Section 23152(f) VC, driving under the influence of marijuana and other drugs, both legal and illegal, is a criminal offense. Unlike DUI alcohol cases in which a driver can be convicted of DUI if their BAC if 0.08 percent or higher, there is no similar “per se” statute regarding marijuana and drug intoxication. This means that the police and prosecutor must actually prove that the driver was under the influence of marijuana and not merely rely on the results of chemical testing.

The DUI Investigation and Evidence of Impairment

Most DUI arrests begin when a driver is pulled over by the police after he or she is observed committed a traffic violation. The driving conduct itself can be used as evidence of impairment, such as where a driver is weaving extensively or running stop signs or red lights. In other cases, there may be no evidence of impaired driving, such as where a driver is stopped for an equipment violation, such as a cracked windshield or faulty brake light, or where the driver is stopped as part of a DUI checkpoint operation.

The officer will speak with the driver and may form an opinion that the driver is under the influence of marijuana based on objective evidence such as a smell of marijuana, physical symptoms of marijuana intoxication or the driver’s own admission to recent marijuana use.

The officer may call a Drug Recognition Expert (“DRE”) officer to assist in the investigation. These officers receive specialized training in recognizing the symptoms of drug intoxication. The driver will be asked to participate in a series of field sobriety tests designed to determine impairment. The officer’s notes regarding the driver’s performance on these tests can be used as evidence of impairment.

After a driver is arrested for DUI, he or she will be asked to submit to chemical testing. Unlike drivers arrested for DUI offenses where alcohol use is suspected, DUI marijuana drivers are not given a choice between a breath test and a blood test. There currently is no breath test designed to measure for the presence of marijuana, so the driver would have to submit to blood testing.

The results of the blood test would not be immediately known and typically are provided to the defense at the defendant’s arraignment as part of the initial discovery packet. The blood test results would show the THC concentration in the defendant’s blood sample. If the THC concentration is high, the prosecution will use this as additional evidence of the driver’s level of impairment.

The defense may be able to rebut the People’s claim that the defendant was impaired at the time of driving. Marijuana stays in a person’s system long after the intoxicating effects have worn off, and the defense may present expert testimony regarding marijuana metabolism and intoxication. Proving impairment in DUI marijuana cases can be difficult if there is no clear evidence of impairment and the prosecutor may be willing to allow the defendant to plead to a reduced DUI charge, such as wet reckless, reckless driving or exhibition of speed.

If you have been arrested for or charged with driving under the influence of marijuana, it is imperative that you speak with DUI lawyer experienced in defending marijuana cases right away. As a former Deputy District Attorney with over 14 years of prosecutorial experience, Michael Kraut understand how to effectively fight driving under the influence of marijuana cases.