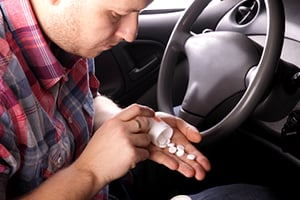 Xanax and other benzodiazepines such as Valium and Klonopin are used to treat conditions such as anxiety. Similar to alcohol, Xanax can lead to sleepiness, lightheadedness and lack of coordination. In a controlled test, drivers who take one milligram of alprazolam experience increased weaving. In fact the test had to be stopped because some test subjects became too tired to continue.

During a traffic stop, if an officer believes that the driver is under the influence of Xanax or another drug the officer may ask the driver about any medications that he or she has ingested. Additionally, the officer may request that a Drug Recognition Expert (“DRE”) officer be called to the scene to perform an evaluation of the driver. DRE officers receive special training on recognizing drivers who are under the influence drugs, including Xanax and other benzodiazepines.

If the officer has sufficient probable cause to believe that the driver is under the influence of Xanax or another drug, the driver will be arrested and taken in for chemical testing. Because there is no breath test that can measure whether or not a driver is under the influence of Xanax, he or she would have to supply a blood sample. Usually the driver is taken to a hospital where a blood draw is completed. The blood sample is then stored and transported to the crime laboratory for toxicology testing. The results of the blood test are not known immediately and usually this information will be released at the defendant’s arraignment hearing which may occur weeks or months after an incident occurs.

The defense may obtain a blood split order to get the original blood sample retested at an independent laboratory. In some cases, the retest may show that the levels of benzodiazepine in the defendant’s blood are below the amount that would cause impairment. It may be necessary to use an expert witness toxicologist to show that based on the low levels of benzodiazepine in the defendant’s blood, he or she was not under the influence of a drug at the time of driving.

Defendants who only have Xanax in their system would not face an administrative DMV driver’s license suspension as a result of the arrest as would a person whose BAC was 0.08 percent or higher. However, if the defendant is ultimately convicted of driving under the influence of drugs in violation of California Vehicle Code Section 23152(f) VC, the DMV will suspend his or her driver’s license at that point based on the DUI conviction.

If you have been arrested or charged with a DUI offense involving Xanax or another prescription drug, it is imperative that you discuss your case with a Los Angeles DUI Lawyer as soon as possible. Los Angeles DUI Attorney Michael Kraut is a former Deputy District Attorney with over 14 years of prosecutorial experience who understands how to effectively defend clients charged with DUI drug offenses.