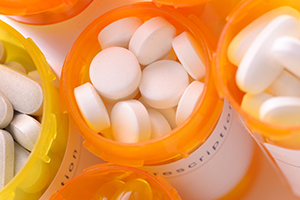 Prescription drug addiction and abuse has increased substantially in the past ten years. Many people think that California’s drug laws only apply to illicit street drugs such as cocaine, heroin, methamphetamine and ecstasy. However, a person can be charged with a criminal offense for possessing or selling certain prescription drugs if the drug was not lawfully prescribed to that person. In addition, individuals can be prosecuted for committing prescription fraud or engaging in doctor shopping in order to obtain prescriptions for controlled substances.

Under California Health and Safety Code Section 11350 HSC, possessing a controlled substance without a valid prescription is illegal. This applies to illicit drugs such as heroin, cocaine and LSD as well as painkillers such as Vicodin and OxyContin, anti-anxiety medication such as Xanax, and codeine. A defendant would only be criminally liable if he or she did not have a valid prescription to possess the drug in question. Recently, California voters passed Proposition 47, which reduced this offense to a misdemeanor in most cases. The maximum penalty under the law is a year in jail and extensive court fines. The Court may allow the defendant to complete a drug diversion program as authorized by Proposition 36 or Penal Code Section 1000 PC that would require the defendant to undergo drug treatment.

Many people who are addicted to prescription drugs may have become addicted after being lawfully prescribed a medication following an accident or illness. In some cases, individuals will engage in doctor shopping or prescription fraud once their own doctor refuses to write them any more prescriptions. Under California Health and Safety Code Section 11173 HSC, it is against the law to obtain controlled substances by fraud, deceit, misrepresentation, subterfuge or by concealing a material fact. This includes seeing multiple doctors in order to obtain additional prescriptions. This offense is a “wobbler” offense that can be charged as either a felony or a misdemeanor. If charged as a felony, the maximum penalty is three years in prison.

Doctors can also be penalized for improperly prescribing controlled substances to those who are either addicts or for patients who did not receive treatment. Under California Health and Safety Code Section 11154(a) HSC, a doctor can be charged with a felony for prescribing, administering, dispensing or furnishing a controlled substance to someone who is not under his or her treatment. In addition, the practitioner will likely face disciplinary action from the Medical Board of California and may lose his or her ability to practice medicine or prescribe drugs. Doctors who knowingly write prescriptions for patients who are known drug addicts can be charged with a felony pursuant to California Health and Safety Code Section 11156 HSC.

If have been arrested for a criminal offense involving prescription medications, it is critical that you meet with an attorney who has the experience necessary to defend these types of offenses. Michael Kraut is a former Deputy District Attorney with over 14 years of prosecutorial experience who understands how to effectively defend clients charged with crimes involving prescription drugs.