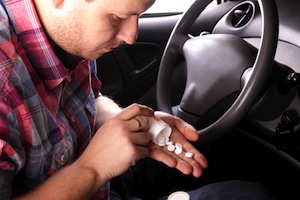 Driving a car in Pasadena while under the influence of any intoxicant is a criminal offense, regardless of whether the DUI involved alcohol or if it was a DUI involving drugs. While many of the DUI arrests and prosecutions in Pasadena involve alcohol, it is not uncommon for law enforcement officers and prosecutors in the Pasadena area to arrest and charge DUI Drug offenses and treat these offenses very seriously. In many instances, a person may be charged with a Pasadena drug crime in addition to the DUI offense.

The Pasadena DUI Process is slightly different for defendants facing DUI with drugs charges. A law enforcement officer must have the required probable cause to stop a person's vehicle, which is typically a violation of the California Vehicle Code or other law.

While most officers are trained in recognizing and testing for alcohol intoxication, the same is not true for drug intoxication. There are a certain number of officers who are certified as Drug Recognition Experts ("DRE") and are specially trained in recognizing the symptoms of drug intoxication. Typically, one of these "experts" will be called in by the officer making the stop to conduct further investigation. These experts will rely on observations made from speaking with the suspect and from a series of field sobriety tests.

There is no breath test that can test for drug intoxication. DUI drug arrests must rely on blood or urine samples that would then be tested for the existence of drugs in the driver's system.

Many people are surprised to learn that the DMV does not take independent action against a driver's license for those driving under the influence of drugs. The DMV, as part of the Administrative Per Se action, only pays attention to a driver's BAC if it was 0.08 percent or higher. However, if the Pasadena DUI drug defendant is eventually convicted of Driving Under the Influence, he or she would still lose their driving privileges as a result of that conviction regardless of whether they had alcohol in their system or not.

A conviction for driving under the influence of drugs in Pasadena can carry serious consequences. In addition to whatever jail sentences or drug or alcohol programming the court may impose, someone convicted of such an offense may have to register with their local police as a narcotics offender and would have a conviction that would be visible to employers and landlords. Such conviction could also result in a loss of security clearance.

There are several ways that an effective Pasadena DUI attorney can attack an allegation of DUI with drugs. As discussed above, officers are not as thoroughly trained in recognizing and evaluating the objective symptoms of drug intoxication. In addition, certain drugs can remain in one's systems long after their intoxicating effect has worn off. An effective attorney may also be able to challenge whether there was probable cause to stop the vehicle.

If you have been arrested for a DUI with drugs offense is Pasadena, it is very important that you consult with an experienced Pasadena DUI attorney right away. Pasadena DUI Attorney Michael Kraut is a former Deputy District Attorney with over 14 years of prosecutorial experience, which included serving as a Senior Trial Prosecutor at the Pasadena Courthouse. As a result, Mr. Kraut has established critical relationships throughout the legal system in Pasadena and is highly respected for his legal acumen and passion for his work.