What is Considered a DUI Refusal? 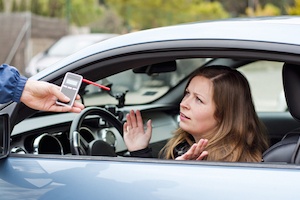 When a driver is arrested on suspicion of DUI, he or she is given the option of taking either a breath or blood test. This test is mandatory under California’s implied consent laws and refusing to take a test will result in criminal and administrative penalties. This includes mandatory jail time on the criminal case and a yearlong driver’s license suspension during which the driver would not be eligible for a restricted license. What constitutes a test refusal is not always clear cut, and in some cases the police may incorrectly claim that a driver refused testing. In these cases, it is critical to be represented by an experienced DUI attorney who understands DUI law and knows how to effectively defend clients accused of DUI refusal.

Under the law, the police must inform a lawfully arrested driver about his or her testing options. The officer must also explain the consequences for DUI refusal. Many law enforcement agencies read from a prewritten script to ensure no errors are made in the admonition. In addition, many departments now video and/or audio record the DUI admonition.

After reading the admonition, the officer will ask drivers suspected of driving under the influence of alcohol whether they want to take a breath or blood test. If the driver refuses one test, the other test option must be given as drivers must be afforded every opportunity to comply with the chemical testing requirement. Drivers who are suspected of driving under the influence of drugs will be required to take a blood test, as there is no breath test that can detect the presence of narcotics.

A driver’s refusal to comply with chemical testing can be interpreted from his or her words or conduct. If the driver says “No” when asked about testing or if he or she vocally indicates a refusal, the officer will consider this a test refusal. The case will still be referred for criminal filing and the DMV will issue a yearlong driver’s license suspension.

In some cases, the driver may verbally agree to testing but act in a manner that would indicate he or she is trying to avoid testing. This is often the case when a driver agrees to the breath test, but then pretends to breathe into the Breathalyzer machine or cannot otherwise provide a sufficient breath sample. The officer may consider the defendant’s conduct to be consistent with DUI refusal. In these cases, the officer should again offer the option of a blood test unless the driver has already refused that method of testing. In some cases, the driver may legitimately be unable to provide a sufficient breath sample due to a medical condition such as asthma. In these cases, the defendant may be able to challenge any subsequent refusal allegation.

Police will also be wary of any attempts to stall testing. A driver who did not recently consume alcohol may try to delay testing so that his or her BAC will continue to drop. The police may allow the driver some time to make a decision or may allow a driver to “change his mind” and take another type of test. However, at a certain point the officer will consider a driver’s reluctance to test as a refusal and will treat it as such. The defendant’s attorney can challenge the reasonableness of the officer’s determination at a later point in court or before the DMV.

If you have been arrested for DUI and there is a refusal allegation, it is crucial that you discuss your situation with an experienced DUI attorney right away. As a former Deputy District Attorney with over 14 years of prosecutorial experience, Michael Kraut is highly respected throughout the court system as a tough litigator who possesses a deep understanding of DUI law.