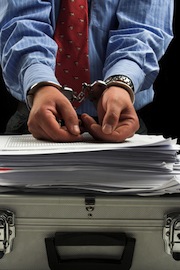 Being charged with or investigated for a white collar crime in the Glendale area can be a traumatic experience that requires the immediate assistance of a highly experienced white collar defense attorney. Glendale white collar crime attorney Michael Kraut if a former Deputy District Attorney with over 14 years of prosecutorial experience who was previously assigned to the Los Angeles District Attorney’s Office’s elite major fraud division and is highly skilled at representing clients charged with Glendale white collar crimes. Mr. Kraut’s expertise in this area of the law is so respected that he is the attorney of choice for judges, prosecutors and law enforcement personnel when it is their family that is in trouble.

Glendale white collar prosecutions are more prevalent than ever before and the penalties can be extremely severe. As a result, it is critical that someone under investigation immediately consult with a Glendale white collar crime lawyer who has the experience, relationships and reputation needed to best defend you.

“White collar crime” is a broad term that refers to a wide variety of crimes involving large-scale theft or fraud schemes. Depending on the details of the offense, these crimes can be prosecuted by the U.S Attorney’s Office in Federal Court or by the Los Angeles County District Attorney’s Office. Prosecution of white collar offenses occurring in Glendale may be handled at the Glendale Courthouse located at 600 East Broadway, Glendale, CA 91206 (for misdemeanors), the Burbank Courthouse located at 300 East Olive Avenue, Burbank, CA 91502 or the Clara Shortridge Foltz Criminal Justice Center located in downtown Los Angeles at 210 West Temple Street (for felonies).

Glendale is widely considered to be the Health Care fraud capital of the United States, with many state and Federal prosecutions stemming from the Glendale area. Health fraud involves fraudulent billing practices of Medicare, Medi-Cal and Denti-Cal by doctors, dentists, chiropractors and others involved in the medical health profession. As a result of recent increases of these offenses, many health care professionals in the Glendale area may find themselves under heightened scrutiny. Health care fraud cases usually begin with the execution of a search warrant at a health-care office. Investigators are looking for calendars, billing documents and financial records that show signs of ongoing fraud.

Another frequently filed white collar offense in Glendale is embezzlement pursuant to California Penal Code Section 503 PC. Embezzlement occurs when a defendant, usually a person in a position of trust within a company or organization, unlawfully steals company or client money that has been entrusted to them. If you have been charged with embezzlement, call our Glendale white collar crime attorney today.

Most white collar defendants have no prior experience with the criminal justice system and being charged with these offenses can be highly stressful. Many of these offenses carry extensive penalties, including potential prison sentences, for those convicted. As a result, it is absolutely critical that a Glendale white collar crime attorney be retained as soon as someone believes that he or she is under investigation. If retained early enough, a skilled Glendale white collar crime law firm can intervene and meet with investigators and district attorneys before charges have been filed.

White collar criminal allegations can differ significantly from other types of criminal prosecutions. The amount of evidence involved is typically voluminous, and sometimes investigations can extend for months or even years. Law enforcement will try to elicit confessions and admissions from suspects, as it may be difficult to prove a case without these. For some cases, a person suspected of a white collar crime may be subpoenaed to testify before a grand jury.

The following list includes some of the more common offenses charged by prosecutors and their respective California Penal Code Sections:

Embezzlement pursuant to California Penal Code Section 503 PC occurs when a person in a position of trust misappropriates funds or property entrusted to them by an employer or client. Those charged with this offense often include accountants, bookkeepers, bank employees and other people in fiduciary trust positions who have access to cash or accounts.

Bribery is a white collar criminal offense under California Penal Code Section 67 PC and California Penal Code Section 68 PC and occurs when someone gives or attempts to offer something of value to someone else in a position of power in order to influence that other person’s actions. Both the person offering and receiving the bribe can be charged with a Glendale bribery offense.

Extortion is a white collar crime pursuant to California Penal Code Section 518 PC, that involves attempting to procure money or property from someone else by via threat of violence or threat of revealing an embarrassing secret. This crime can carry extensive prison sentences for those convicted.

Fraud is a general category of offenses involving intentional misrepresentations made in order to trick someone into providing money or property to the offender. Fraud can exist in a wide variety of situations and is punished like other theft crimes in Glendale.

Perjury prosecutions have additionally increased in recent years. The crime of perjury occurs when someone lies under oath or knowingly signs a document under penalty of perjury that contains false information. Perjury cases under California Penal Code Section 118 PC can be easier for prosecutors to prove in comparison to other white collar crimes, so they tend to favor these cases. A perjury conviction is punishable by up to three years in prison.

The Glendale White Collar Criminal Process: From Arrest to Expungement

White collar crimes include offenses categorized as misdemeanors and felonies. If charged with a felony, a defendant can potentially be sentenced to prison. In contrast to other types of crimes, white collar offenses in Glendale are often investigated extensively by specialized law enforcement personnel before charges are ever filed. Because of this, it is critical to retain a Glendale White Collar Defense Attorney right away when dealing with a investigation, as early intervention can often result in charges being significantly reduced or even rejected in some cases.

For many felonies, prosecutors will file a complaint alleging charges against a defendant and will request that an arrest warrant be issued by a judge. Law enforcement will execute this warrant and take the defendant into custody, where he or she will appear for arraignment before a judge at the Glendale Courthouse. The defendant is informed of the charges at the arraignment and bail can be argued by both sides. In many cases, the prosecution will make a motion under California Penal Code Section 1275 PC requesting that any bail posted must first be reviewed to ensure the funds used are not from illegal sources.

The defendant would next have to return to court for a felony arraignment to respond to the prosecutor’s felony information filed after the preliminary hearing. Bail can again be addressed at this point. Following this arraignment, the defendant is entitled to a trial within 60 days unless he or she waives this requirement.

Before trial starts, there can be several pretrial hearings at which the prosecutor and defense work to resolve various pretrial issues. During these hearings, there are usually efforts made to conduct plea negotiations in order to resolve the case. If the prosecution and defense do not come to an agreement, the case would proceed to trial.

A defendant is constitutionally entitled to a jury trial to contest the charges against him or her. At trial, the prosecutor must be able to prove that the defendant is guilty beyond a reasonable doubt to the jury panel. Both the prosecution and defense are given an opportunity to make their case to the jury through witness testimony, introduction of evidence, and direct argument. Often, white collar trials can last for weeks or months. After both sides have argued, the jury would go into deliberations to try to reach a unanimous verdict. If a unanimous not guilty verdict is returned, the process ends and the defendant cannot be retried for the offense. If the jury is unable to reach a unanimous verdict, a mistrial may be declared and the case could be retried by the prosecutor.

If there is a unanimous guilty verdict, the defendant would then have to appear before the judge to be sentenced. The sentence is usually dictated by statute and can be affected by the circumstances of the offense and the criminal history, if any, of the defendant. Those convicted can appeal their case so an appellate court can review the case for any legal or procedural errors that may merit a reversal of the conviction.

Once probation has terminated the defendant may be able to request an expungement of the charges. If granted, an expungement order would vacate the guilty verdict and dismiss the charge(s) per California Penal Code Section 1203.4 PC.

If you or someone who know are under investigation for it is crucial that you meet with an experienced Glendale white collar crime attorney as soon as possible. Glendale white collar crime lawyer Michael Kraut is a former Deputy District Attorney with over 14 years of prosecutorial experience who formerly served in the DA’s elite Major Fraud Division. Mr. Kraut possesses the knowledge and experience required to effectively combat white collar criminal allegations. Mr. Kraut works tirelessly to ensure his clients receive the highest level of representation.