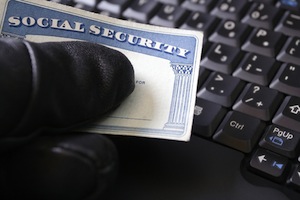 Identity theft is a criminal offense that is broadly defined as using another person's identifying information without consent for fraudulent purposes. Under California Penal Code Section 530.5 PC, identity theft is a serious crime that can carry lengthy prison sentences.

There are four different classes of identity theft that are addressed by California Penal Code Section 530.5 PC:

The post office accidentally delivers a new credit card to the wrong address. The man at the address receives the card and notices that it is in his neighbor's name. The man activates the card and uses it to make several purchases. This man could be prosecuted for identity theft under California Penal Code Section 530.5 PC, as well as credit card fraud under California Penal Code Section 484g PC.

Identity theft requires that the personal information must have been used or acquired for an unlawful purpose. There may be situations where another person's identity is used without a fraudulent purpose. In these cases, the defendant would not be criminally liable under the identity theft statute.

Many large financial institutions will simply write off losses when one its customers claims to be a victim of identity theft. Because of this, someone may find themselves falsely accused of identity theft by another person (such as an ex-roommate, ex-boyfriend or ex-girlfriend) who is simply trying to avoid their own debts.

Under California Penal Code Section 530.5 PC, identity theft is a "wobbler" which can be charged as either a felony or a misdemeanor, depending on the criminal history of the defendant, the extent of the loss caused by the crime, and other relevant factors.

It is important to note that each time a defendant uses another person's personal information, it is considered a separate and distinct violation of the identity theft statute. Thus a defendant can be charged with and penalized for multiple counts of identity theft even where there is only one named victim.

Identity theft is a serious white collar offense that prosecutors do not treat lightly. If you or someone you know are being investigated for identity theft, it is very important that you speak with an experienced Los Angeles Criminal Defense Attorney as soon as possible. Los Angeles Criminal Defense Lawyer Michael Kraut is a former Deputy District Attorney with over 14 years of prosecutorial experience whose previous service included an assignment in the elite Major Fraud section of the Los Angeles County District Attorney's Office. As a result of his experience, Mr. Kraut is considered one of the best attorneys in Los Angeles for fighting identity theft charges.