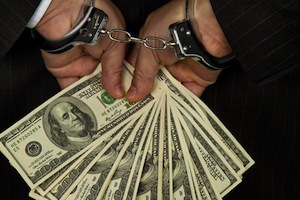 It is often the case that highly profitable Criminal Enterprises are faced with the problem of what to do with the vast amounts of money they earn. Many of these enterprises attempt to conceal or obscure the illegal origin of this money by channeling the funds through bank accounts or legitimate businesses. In this way "dirty" money becomes "clean," which is where the term "Money Laundering" comes from. Money Laundering under California Penal Code Section 186.10 PC is considered a White Collar Crime that carries serious penalties.

A financial institution means any national bank or banking institution located or doing business in California. A transaction under the law can include a deposit, withdrawal, transfer or exchange of funds.

A man commits Grand Theft under California Penal Code Section 487(a) PC by stealing $100,000 in cash from an armored truck at the company he where he works. The man knows that any changes to his finances may raise suspicions, so he makes numerous small deposits into various bank accounts in order to disguise the origin of this money. As long as the banks are based in California or operate in this state, he could be prosecuted for Money Laundering under California Penal Code Section 186.10 PC.

When Money Laundering is committed specifically in connection with Drug Crimes, the defendant can be prosecuted under California Health and Safety Code Section 11370.9 HSC.

If the person lacked the intent to launder money, or did not know that the funds in question were derived from a criminal source, there would be a legitimate Mistake of Fact defense. This shields banks and other financial institutions from prosecution where they simply provide banking services and are not part of a money laundering scheme.

Money Laundering under Penal Code 186.10 PC is a "wobbler," which means that a prosecutor can file either misdemeanor or felony charges, depending on the factual circumstances and the defendant's criminal history.

If prosecuted as a misdemeanor, Money Laundering can be punished by up to a year in jail and court fines.

If prosecuted as a felony, a sentence can carry up to three years in prison and a maximum fine of $250,000 or twice the amount of money laundered, whichever is more. If a person has prior Money Laundering convictions, the maximum fine can be $500,000 or five times the laundered amount, whichever is greater.

In Federal Court, a conviction for Money Laundering can result in a sentence of up to 20 years in Federal Prison.

If you or someone you know have been charged with or are under investigation for Money Laundering, it is imperative that you meet with a Los Angeles Criminal Defense Attorney right away, specifically one with extensive experience in defending White Collar cases. As a former Deputy District Attorney with over 14 years of prosecutorial experience, Los Angeles Criminal Defense Attorney Michael Kraut is highly skilled at cases of this nature. Mr. Kraut was formerly a member of the elite Major Fraud Division at the Los Angeles County District Attorney's Office and is highly respected throughout the court system for his knowledge and ability to handle complex legal issues.