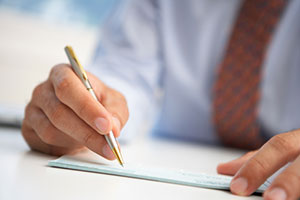 Forgery under California Penal Code Section 470 PC, is a white collar crime that involves falsifying a signature or seal or counterfeiting documents as part of a fraud scheme.

A forgery offense can be committed in the following ways:

To prove that the defendant committed forgery, a prosecutor must be able to establish that:

A man finds a checkbook in the street and proceeds to write a check to himself. He cashes the check at the bank and endorses it by faking the check owner’s signature on the back of the check. In addition to check fraud, the man could be prosecuted for forgery under California Penal Code Section 470(a) because he forged the signature of another on a financial instrument.

In the same example, the man writes out a check from the stolen checkbook and gives the check to his wife, who knows the checkbook is stolen. The wife then tries to pay for items in a store using that check. Even though the wife did not actually forge a signature on the check, she could be charged with forgery under California Penal Code Section 470(d) because she tried to “publish” the check by passing it off as valid in the store.

The crime of forgery requires intent to defraud. In many cases, a person may sign for another person because they believe they had the authority to do so. These people would not be guilty of forgery because they did not have the specific intent required by the forgery statute.

Forgery is a “wobbler” offense that can be charged as either a felony or a misdemeanor. In making a filing decision, a prosecutor will consider factors such as the criminal history of the defendant, the magnitude of the fraud offense involved and the amount of loss suffered, if any. If charged as a misdemeanor, the defendant can be sentenced to up to a year in jail, restitution to the victim and substantial court fines. If charged as a felony, the defendant can potentially be sentenced to up to three years in prison, in addition to fines and restitution.

If you are under investigation for a forgery-related offense, it is critical that you meet with a Los Angeles Criminal Defense Attorney as soon as possible. Los Angeles Criminal Defense Attorney Michael Kraut is a former Deputy District Attorney with over 14 years of prosecutorial experience who previously prosecuted white collar offenses as part of the District Attorney’s elite Major Fraud Unit. Mr. Kraut’s wealth of experience has proven invaluable to his clients charged with forgery and related white collar offenses.