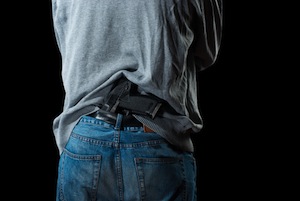 While the Second Amendment to the United States Constitution provides a general right to bear arms, there are several ways that a person can forfeit his or her gun ownership rights. For those who have lost these rights, subsequent possession of a firearm is illegal under California Penal Code Section 29800 PC.

In order to prove that a defendant is guilty of possessing a firearm by a narcotic addict, a prosecutor must be able to establish the following elements:

A person is considered to be addicted to a narcotic drug if:

If the defendant is a felon or has certain misdemeanor convictions, in order to be convicted under California Penal Code Section 29800 PC a prosecutor must prove the following elements:

Potential misdemeanor convictions that would trigger a prohibition against gun ownership include the following:

A man is stopped during a routine traffic stop. When interacting with the man, the law enforcement officer who stopped the vehicle notices what appears to be a gun in the backseat of the vehicle. The man has a prior felony theft conviction, however it is very old. The man could be charged with felon in possession of a firearm in violation of California Penal Code Section 29800 PC.

In another example, a man is on parole for a felony offense and lives with a roommate. During a routine search, a gun is found in the roommate’s area. The man had no knowledge that his roommate possessed a firearm. This man would not be criminally liable for felon in possession of a firearm because he did not knowingly possess the weapon.

4. Defenses to Felon in Possession of a Firearm

If the firearm in question was discovered as the result of an unlawful search and seizure, the defendant may be able to challenge whether there was sufficient probable cause to justify the stop or search. If successful, the firearm would be suppressed and the prosecutor would be unable to proceed.

Possession of a firearm by a felon or otherwise prohibited person is a felony offense that is punishable by up to three years in prison.

6. Criminal Defense for Felon in Possession of a Firearm

If you or a loved one have been charged with being a felon in possession of a firearm, it is crucial that you speak with a Los Angeles Criminal Defense Attorney right away. Los Angeles Criminal Defense Attorney Michael Kraut is a former Deputy District Attorney with over 14 years of prosecutorial experience who previously prosecuted major felonies and knows how best to defend these types of cases. Mr. Kraut is highly respected as a knowledgeable advocate who fights hard on behalf of his clients.